The Michigan Soldiers' and Sailors' Monument

This is located in the Campus Martius Park in Detroit. It is at the opposite end from the Compuware Building. It was built in 1872 as a momument to the Michigan Soldiers and Sailors that gave their life in the Civil War.

The Monument was created by Randolph Rogers with funds collected voluntarily from the citizens of the state. There are figures at each part of the statue that represent cavalry, infantry, artillery and the Navy. At the top of the statue is the historic Indian warrior Michigan or Victory. In 2005, the monument was re-dedicated as the park was restored and the contents of the time capsule in the monument was read.

Nearby this statue is also the Spirit of Detroit (another entry at some point). 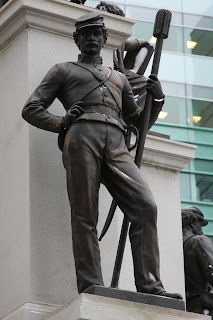 This is the figure representing artillery. 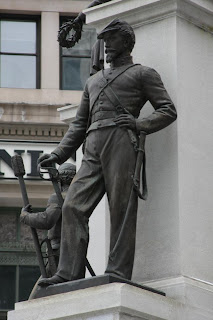 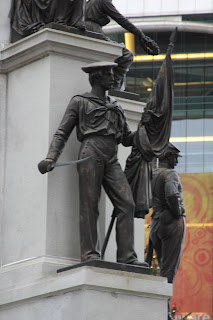 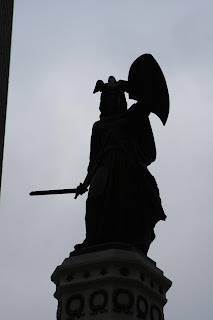 The statue at the top. 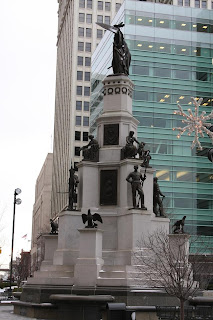 An Overview of the Monument.
Posted by Mikoyan at 10:32 PM 1 comment:

One day as I was walking around Ann Arbor, I noticed these inside one of the arches of the University of Michigan Law Quandrangle. I wish I knew a little more about them but judging by their appearance, I would be willing to guess they were professors at the time the buildings were built. Note: After posting these on a Michigan site, someone pointed out that these are former Michigan Presidents.

The Law Quad was built between 1924 and 1933 with funds donated by an alumnus, William Cook. The Library is pretty impressive (that's for another page though).
Anyways, here are the gargoyles. 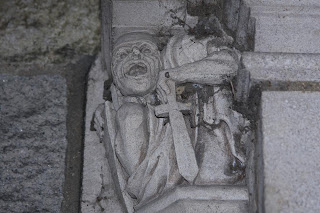 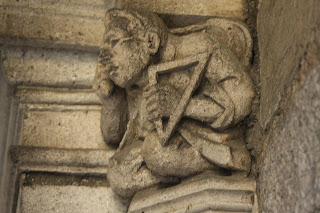 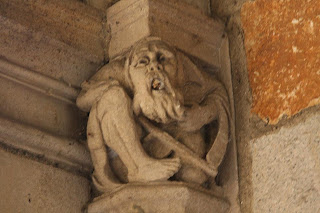 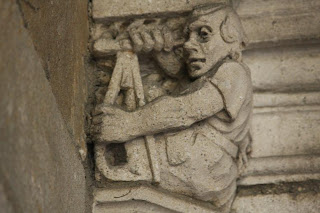 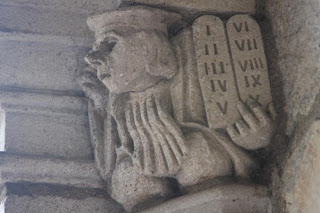 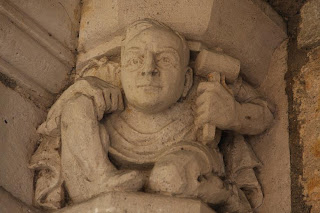 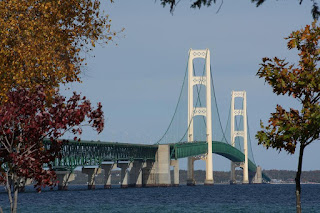 The Mackinaw Bridge in the Fall. This is truly a beautiful site. 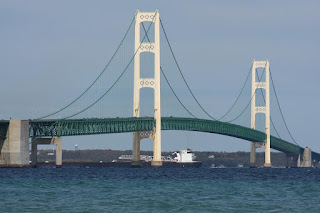 Probably one of the more famous shots of the Bridge, with a freighter passing underneath. 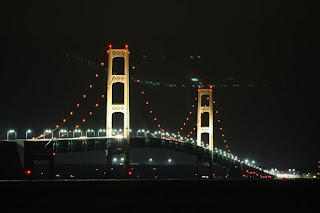 This was one of the my early shots of the bridge as I was learning the camera. The UFOs are a reflection off the lens onto the filter. 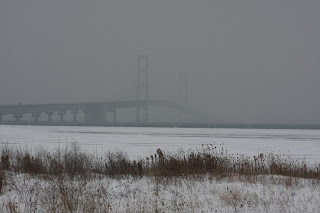 A shot of the Bridge in the Winter. 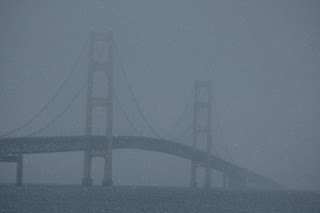 And another in the winter.

One of my favorite places to visit in Michigan is the Mackinaw Bridge. It is used to connect the Upper Pennisula to the Lower Pennisula. Before the Bridge was built, you had to take a ferry if you wanted to go to either Penninsula.
Construction of the Bridge finished in 1957. It was finished on schedule and traffic started to cross in November of that year.
The design of the bridge was influenced by the Tacoma Narrows Bridge disaster (any engineering student has seen video of that). The bridge itself was reinforced so that it didn't reach a resonance frequency. In the center is a grating so that the pressure on both sides of the bridge is equalized which means that it wont behave like a wing.
The length of the main span is 3,8000 feet which makes it the third longest suspension in the US and 12th in the world. The entire bridge covers 5 miles worth of water.
Every year you can walk the Bridge at Labor Day.
I think it is a very beautiful bridge, green and white is a nice color scheme. In the summer, the water has a nice shade of blue. I will take it over the Golden Gate Bridge any day.
Posted by Mikoyan at 8:25 PM No comments: 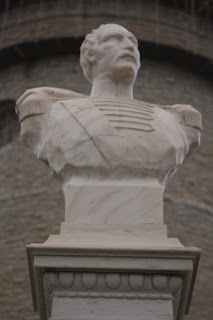 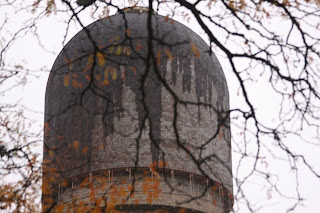 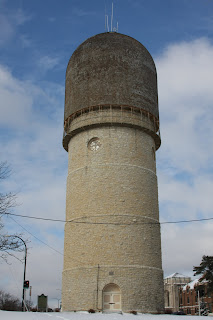 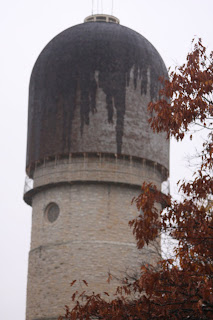 I graduated from Eastern Michigan University in Ypsilanti, Michigan. I have lived in Ypsilanti ever since. Probably one of the most distinctive landmarks in Ypsilanti is the Water Tower.
Ypsilanti started in 1809 as a trading post, it eventually became a village in 1829. It was named after Dimitrius Ypsilanti, a Greek patriot. The Water Tower was built in 1890 and is currently listed as a historic site. The legend is that if a virgin graduates from Eastern Michigan, it will collapse. The other legend is that Paul Bunyan is buried there.
Posted by Mikoyan at 11:09 PM No comments:

This is my third attempt at a blog. My first attempt mostly dealt with politics but that has been getting more depressing lately. My second attempt was dealing with traffic issues but that just makes my blood boil. In this attempt I will display some of the fruits of my hobby...photography.

I started photography in earnest about 21 years ago when I took a photojournalism class in High School. It was a pretty fun class, I learned about different aspects of photography even how to develop black and white film and prints. I liked the class so much that I took a second semester and a couple of my pictures even made it into the yearbook.

I didn't do as much photography while I was in college as I didn't really have the time. I picked it up a little bit after college mostly taking pictures of air shows and stuff. But it wasn't really in earnest. Then I went down to Dayton with a friend and he had a digital camera. It was pretty cool. It was really cool to see the pictures as you are taking them and if they didn't turn out, you could take them again.

So I took the plunge and got myself a Kodak DC240. It was a pretty good camera but it went through the batteries fairly quickly, didn't have the greatest zoom and it didn't take pictures quickly. I did have some fun with it but it was lacking something.

So then I got myself a Panasonic FZ7. It was a very fun camera, had an awesome zoom and it didn't take long to process the pictures. It felt almost like having the Pentax again because I could control shutter speed and had some control of the f-stop. But it still was lacking.

Then I found out about Digital SLR cameras. They sounded just like what the doctor ordered. After doing some research, I decided on a Canon 40D and I love it to death. I got it about 3 months ago and I've taken about 4000 pictures so far. What's really nice is that I feel like it will give me plenty of things to learn about.

Anyways, this will mostly be about Michigan but I will post from other places as well.
Posted by Mikoyan at 10:01 PM No comments: