A Brief Michigan Exposures Guide to Michigan Lighthouses - Part I

A couple of trivia bits about Michigan.  One, Michigan has the longest freshwater coastline of any state in the union (and the longest coastline of the lower 48).  Two, with over 100 lighthouses, Michigan has more lighthouses than any state in the union.  So far I've managed to visit 40 of them.  I think the only ones that I haven't visited in the lower peninsula are the ones on accessible by boat.  I still have a trove of them to visit in the Upper Peninsula though.

Because Michigan borders four of the five Great Lakes and the Great Lakes have been used for shipping for a long time, Michigan has a pretty rich nautical heritage.   Despite all appearances, the Great Lakes are pretty dangerous and because of that, there are a pretty significant number of lighthouses.

A lighthouse is typically used to indicate an area that is dangerous to ships.   They are also used as guides into ports.  The earliest lighthouses were typically a fire pit on top of a hill and were used to guide the entrances into ports.  One of the earliest lighthouse towers was the lighthouse at Alexandria which was built around 300 BC.  It was approximately 400 feet tall and was the tallest man-made structure for a long time.  It became damaged by earthquakes between 956 and 1323 AD and became an abandoned ruin.

Modern lighthouses didn't come into existence until the early 18th Century as long distance sea travel became more prevalent.  As navigational tools became more accurate, their use fell into decline although many of them are still used as aids to navigation (but not as much as they used to be).

For these posts, I'm going to start at the southeast end of the state and work my way around.  As I said, I haven't been to all of the Michigan lighthouses but these are a pretty good number of them.  I'm not going to provide a ton of detail on this post except maybe how to get to them. 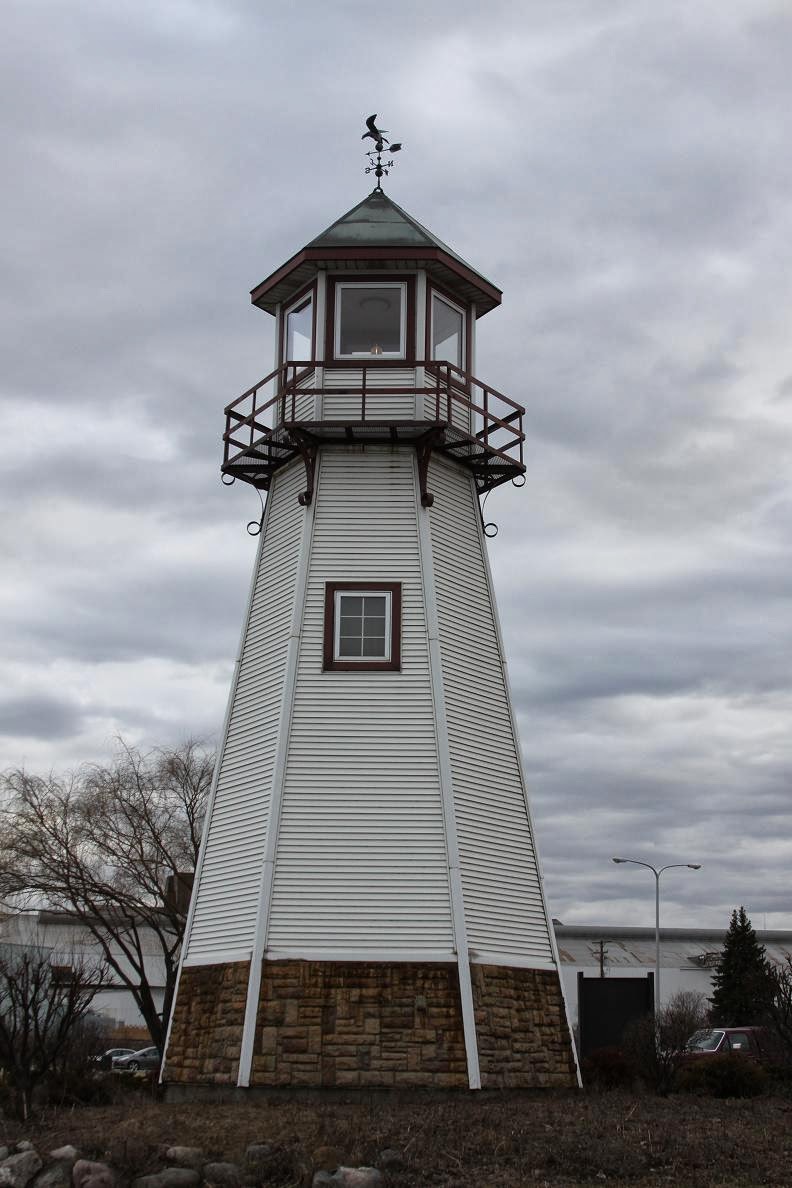 My first lighthouse is the one at Belanger Park in Wyandotte, Michigan.  This park is just off Jefferson Avenue and is near the Great Lakes Steelworks.  It is actually a pretty decent spot to watch ships but will cost $5 to enter during the summer (unless you get a pass).  I'm not actually sure if this is an actual lighthouse or just a recreatin of one but I will include it on this list. 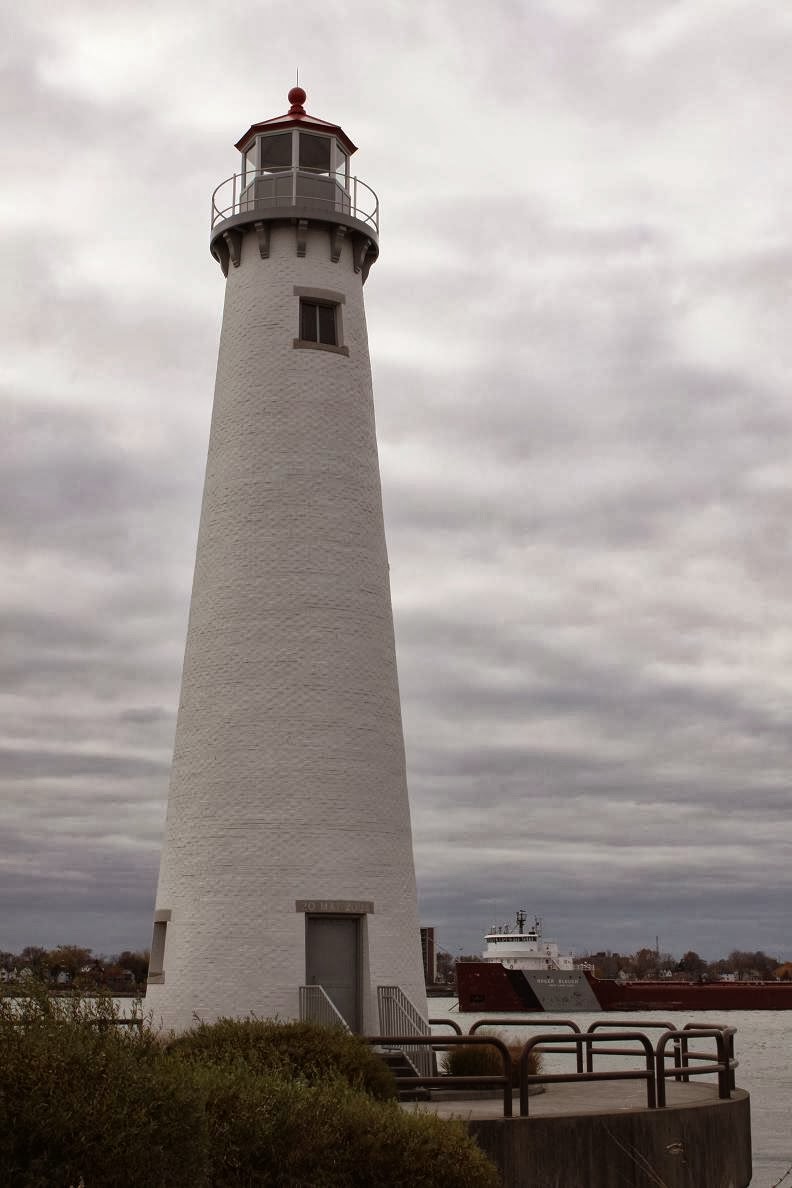 Next up on my list is the Tri-Centennial Lighthouse in Milliken State Park in Detroit.  This tower is actually a replica of the Tawas Point Lighthouse and was built in 2001 to commemorate the 300th Anniversary of the founding of Detroit.    This is also a pretty decent spot to shipwatch (as evidenced by the Roger Blough in the background). 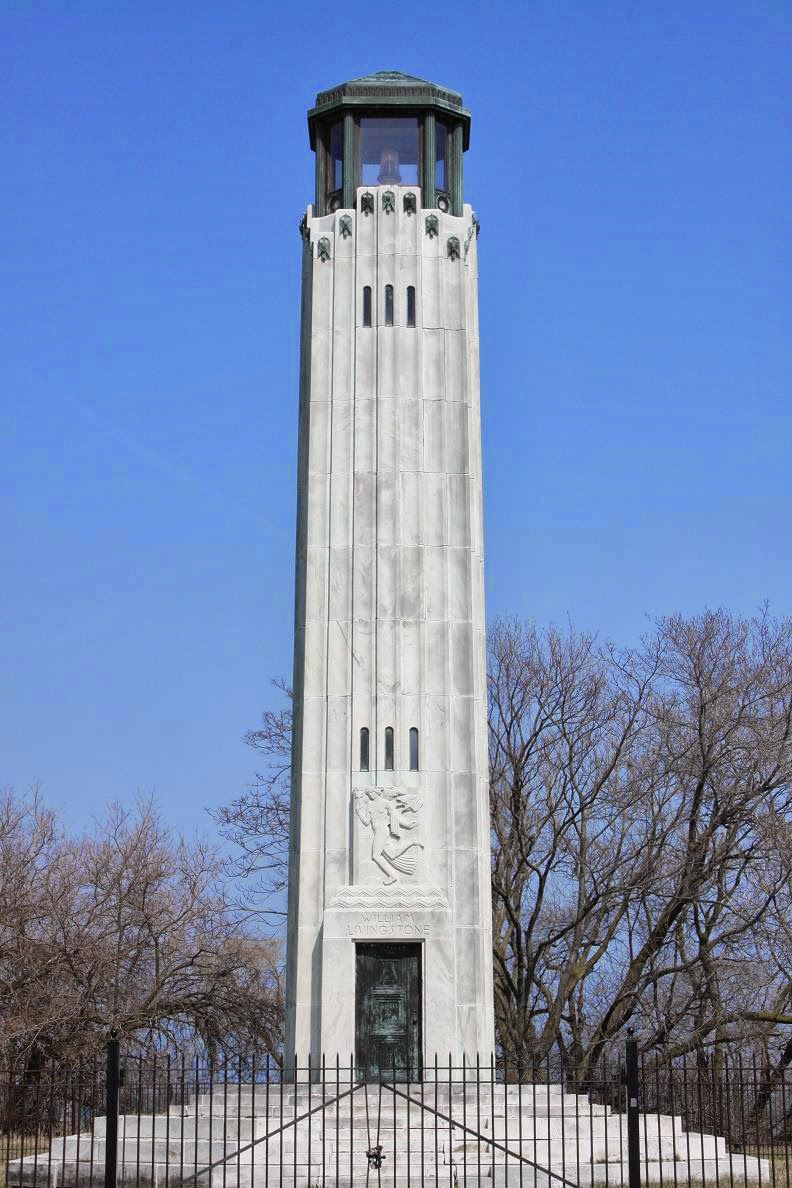 The Livingstone Lighthouse can be found at the east end of Belle Isle.  While it is not an active aid to navigation, the tower is lit at night.  This lighthouse is dedicated to William Livingstone who was a pretty influential person on Great Lakes shipping. 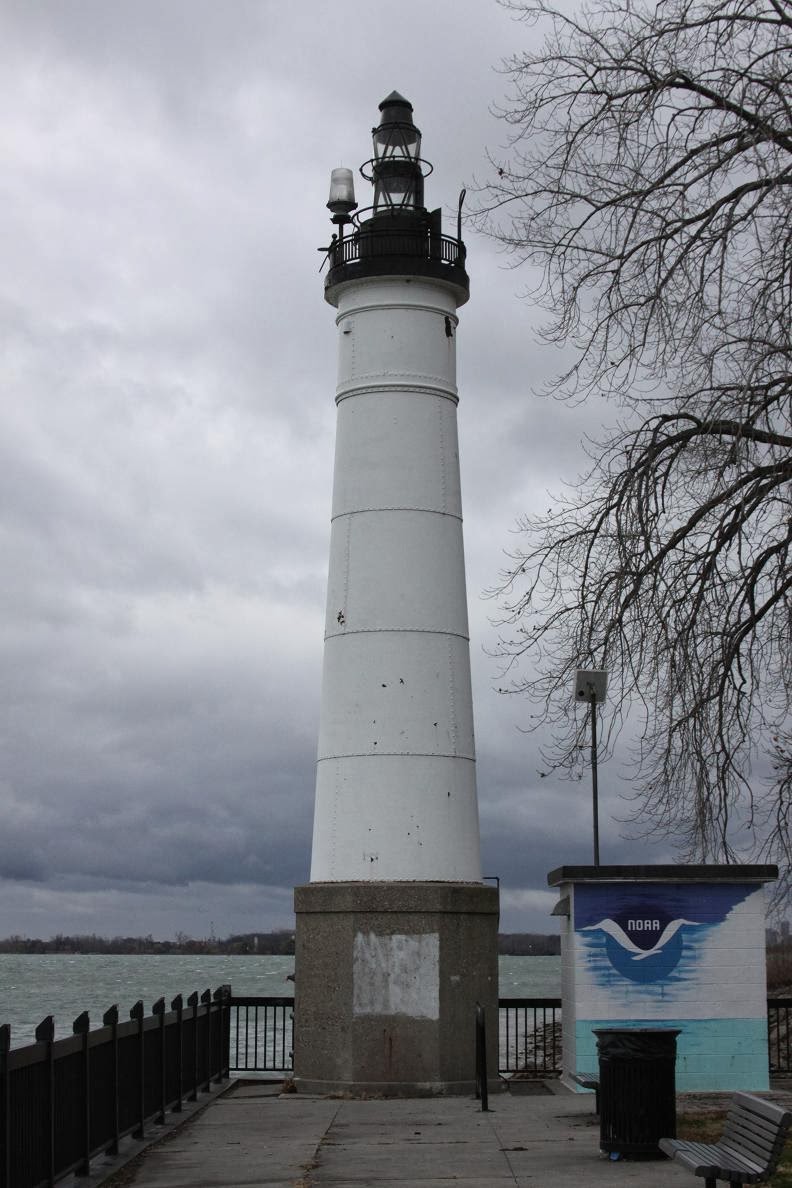 Windmill Point can be found at the end of Alter Road in Grosse Pointe.  The park itself is an okay spot for boatwatching but can be a little rough. 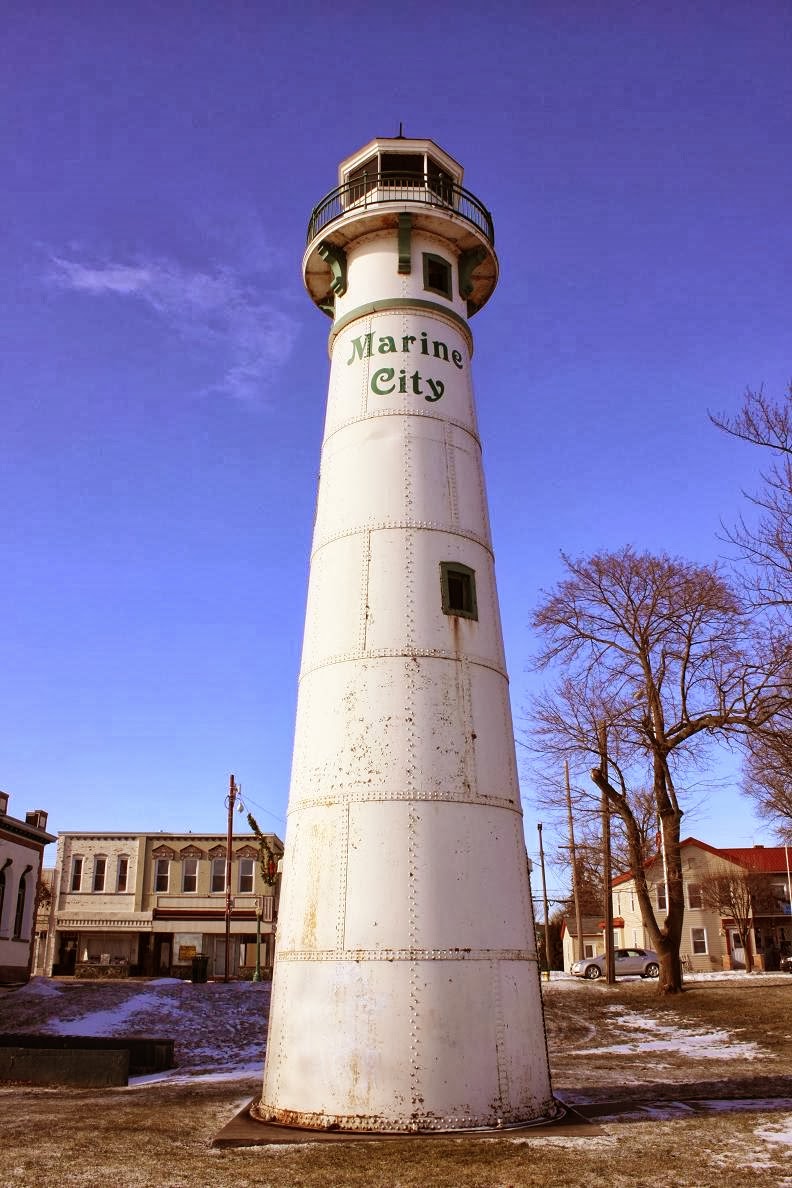 This lighthouse used to be on Peche Island but was moved to Marine City in an effort to preserve it.  In front of it is a pretty neat walkway and behind it is a pretty good restaurant. 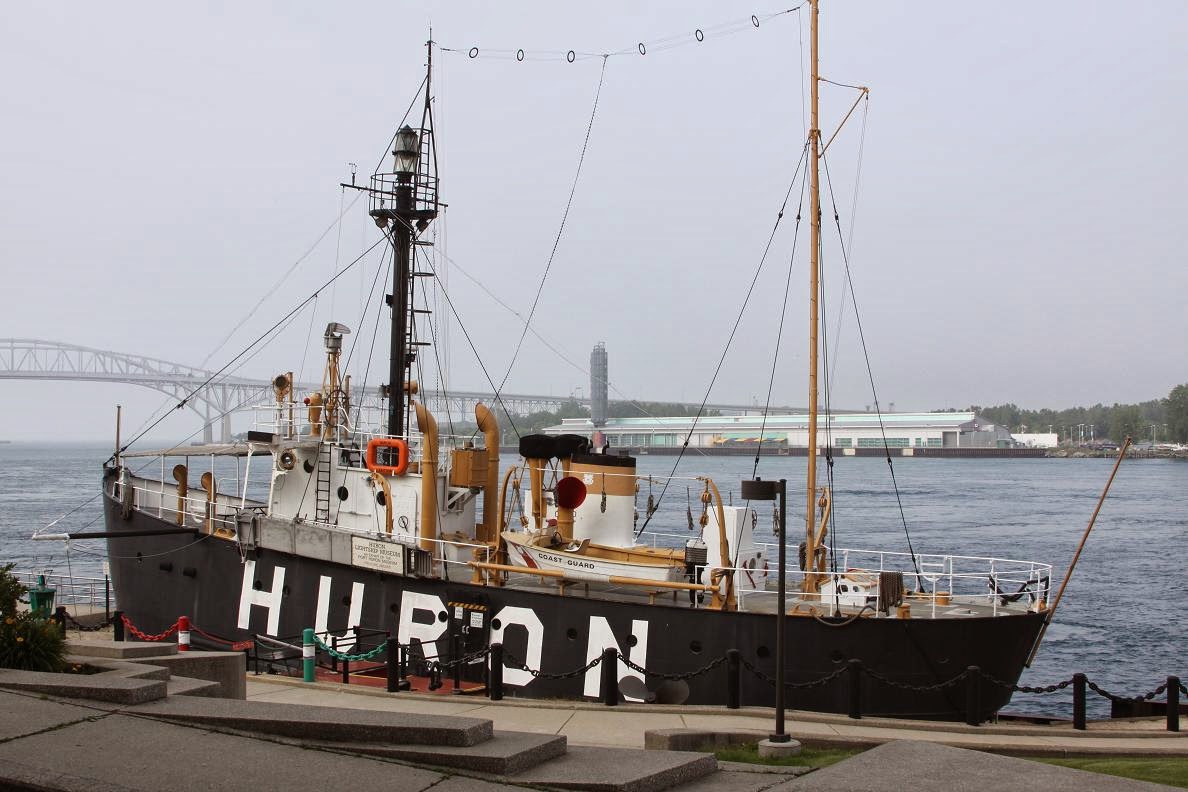 The Huron Lightship is located in Port Huron and now serves as a museum ship.  This is on a pretty cool walkway which serves as an excellent place to watch ships. 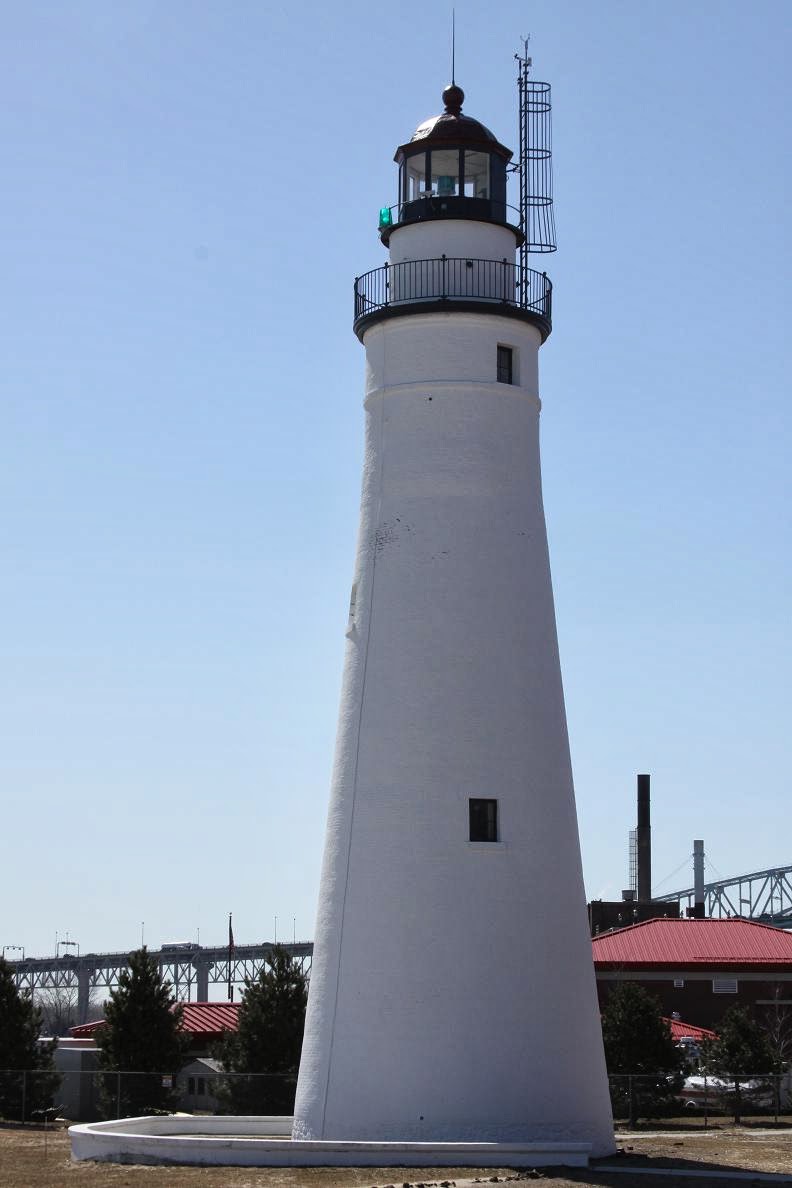 Just off of M-25 is the oldest lighthouse in the State of Michigan.  This is the Fort Gratiot Lighthouse and was built in 1829.  They are actually renovating the grounds around this lighthouse and it looks much better than when I first saw it. 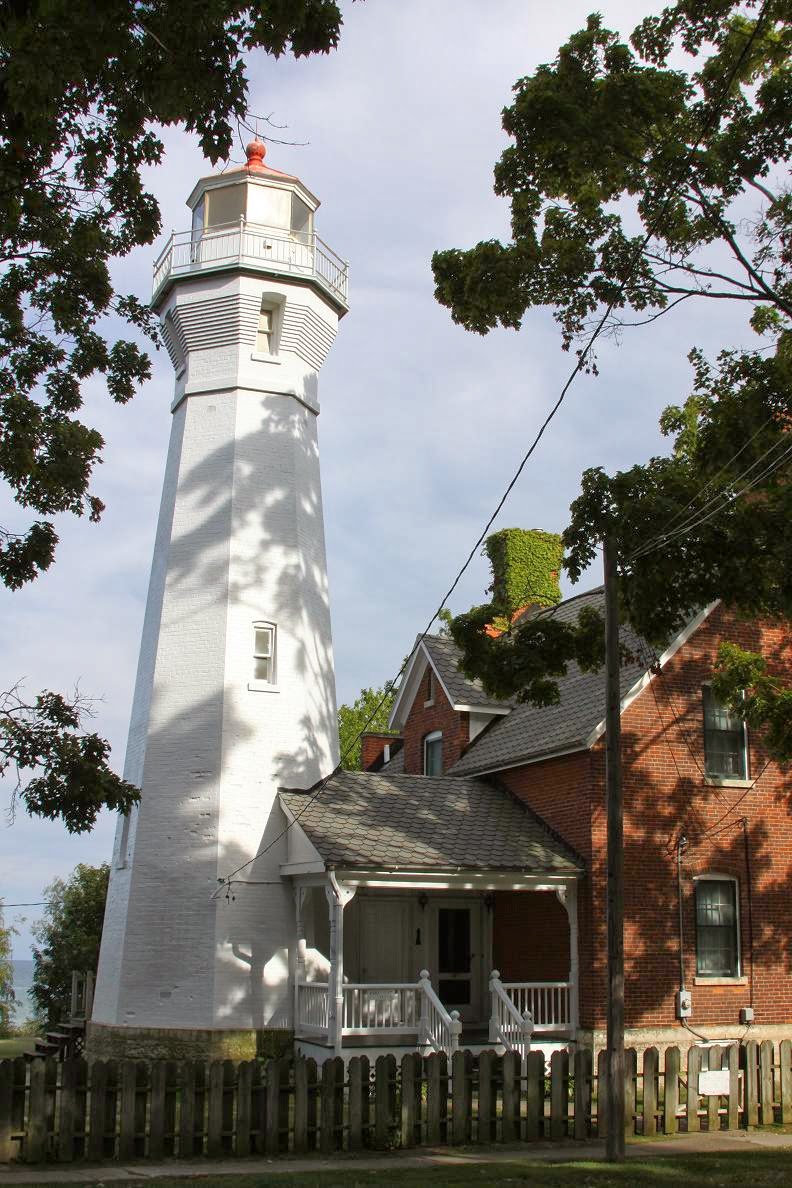 Continuing up M-25 leads us to the Port Sanilac Lighthouse.  This now serves as a bed and breakfast and is privately owned. 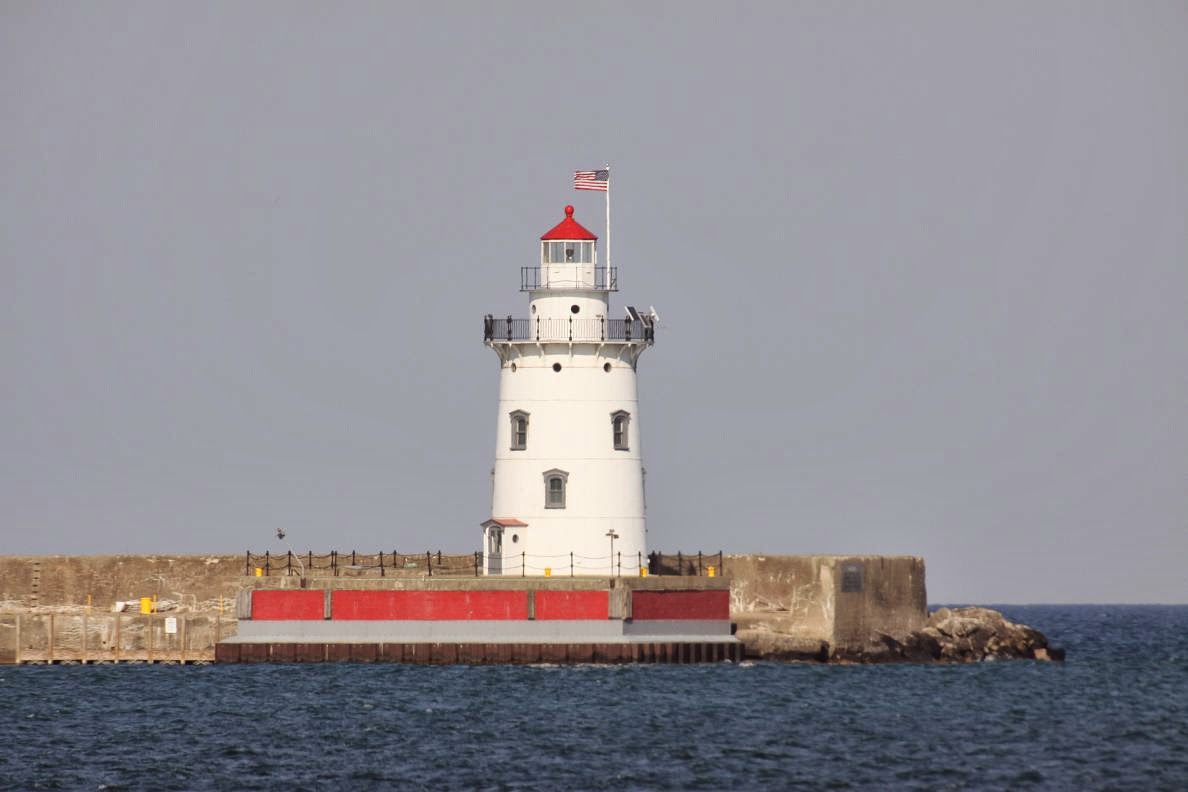 If drive a little further north on M-25, you will reach the Harbor Beach lighthouse.  I'm not sure if you can actually get close to this lighthouse as it is situated on the end of a breakwater. 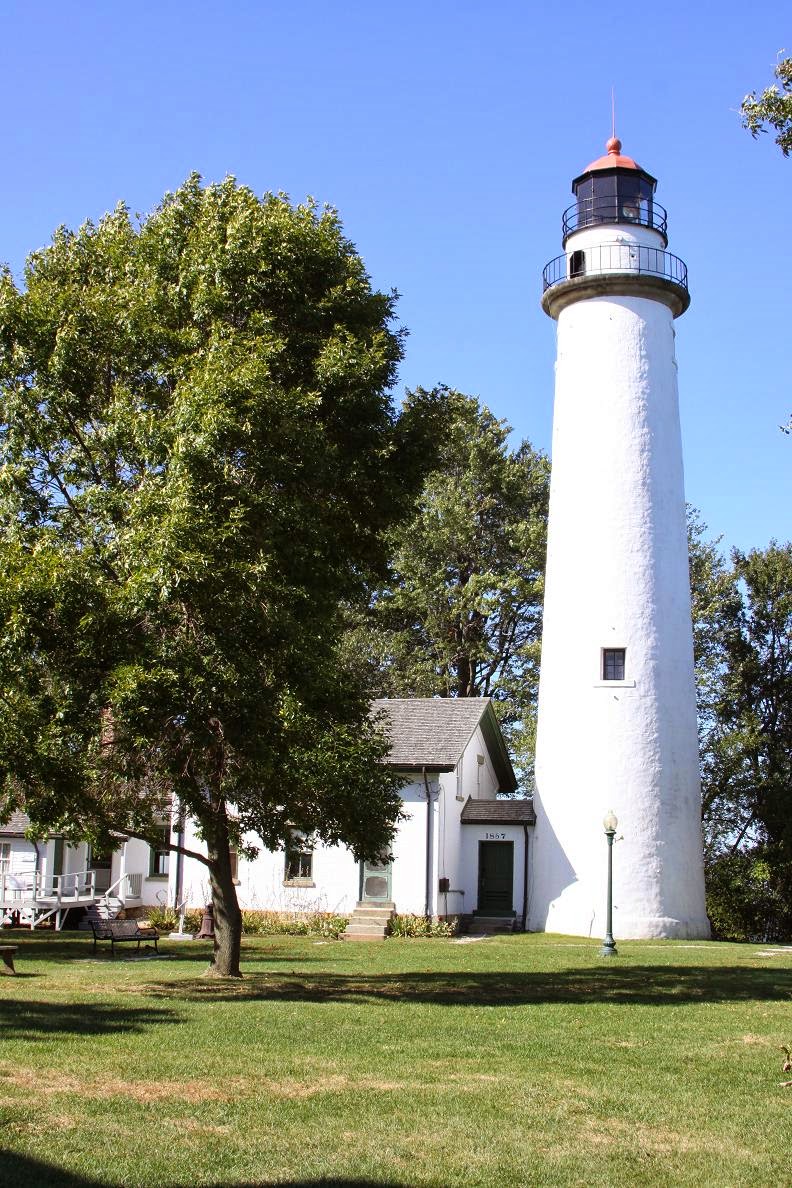 At the tip of the thumb is the Point Aux Barques lighthouse.  You can actually go inside this one and climb the tower if you wish. 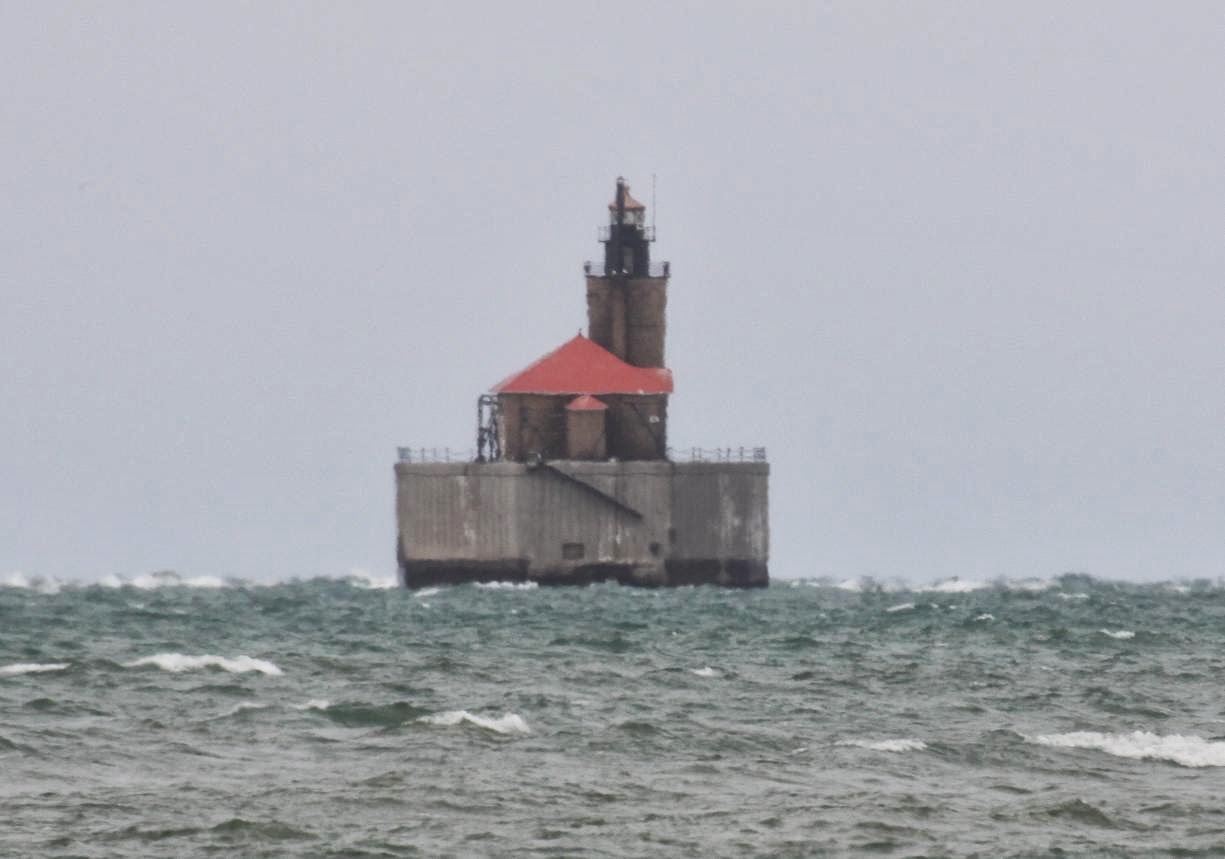 Following M-25 towards Bay City will take you past the Port Austin lighthouse.  This is a reef lighthouse and you would need a boat to get any closer. 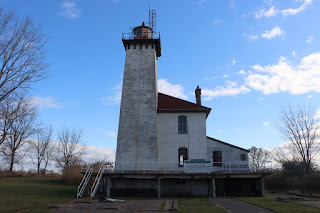 The Saginaw River Rear Range light is in Bay City but it's on private property so you can only get there by invitation. 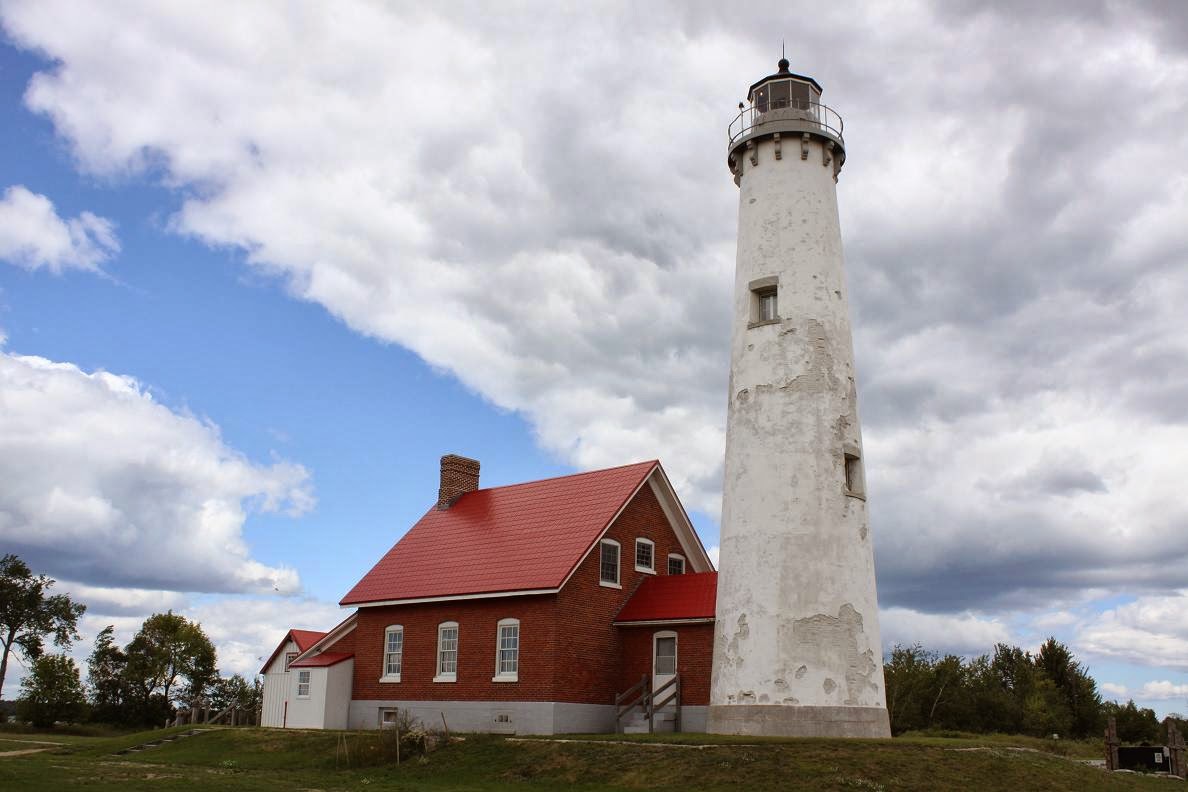 We switch over to US-23 for the next leg of our lighthouse journey.  As you continue north out of Bay City, you will reach Tawas and the Tawas Bay Lighthouse.  This is actually one of the nicer lighthouses (I think) and they offer keeper programs where you can stay in the lighthouse for a week.  This lighthouse is actually on State Park land, so you will need a State Park Pass which I highly recommend anyway. 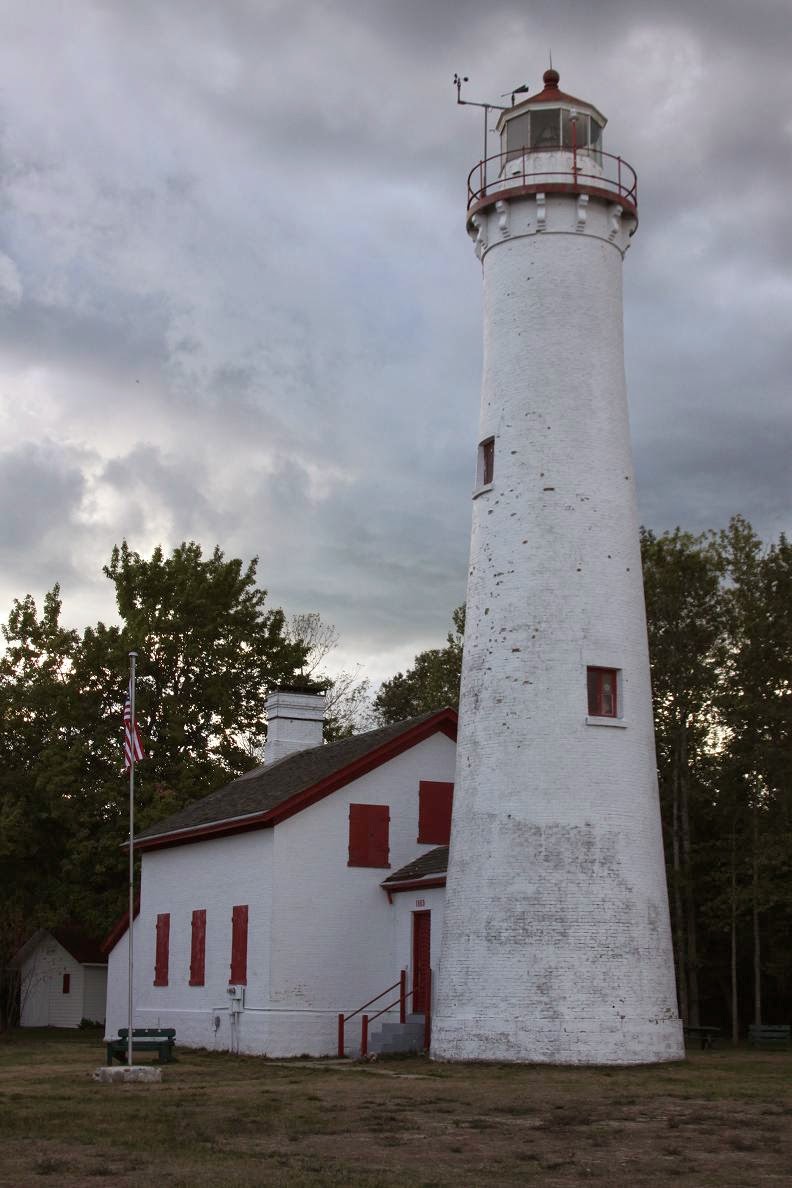 Continuing on US-23 will lead you to the Sturgeon Point lighthouse.  This one is a little off the beaten path and is a little more secluded. 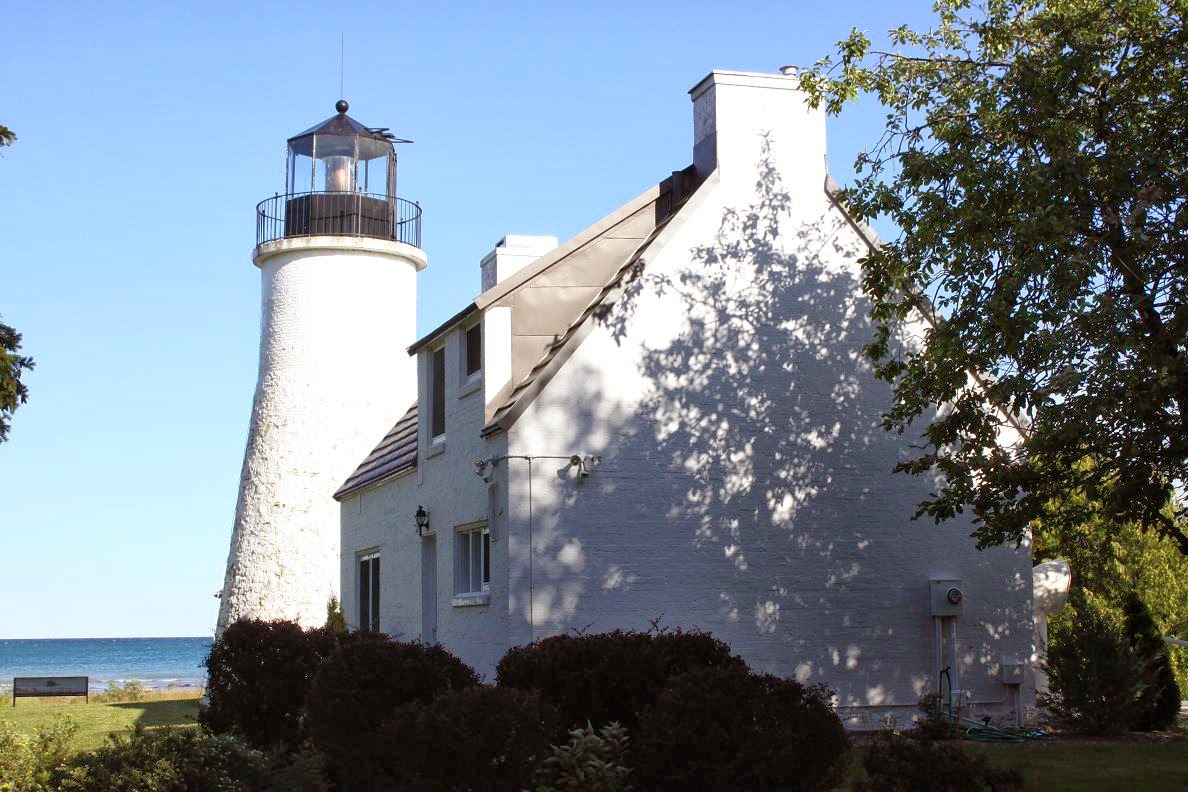 Driving a little further north on US-23 will get you to the old Presque Isle lighthouse.  This particular lighthouse is rumored to be haunted. 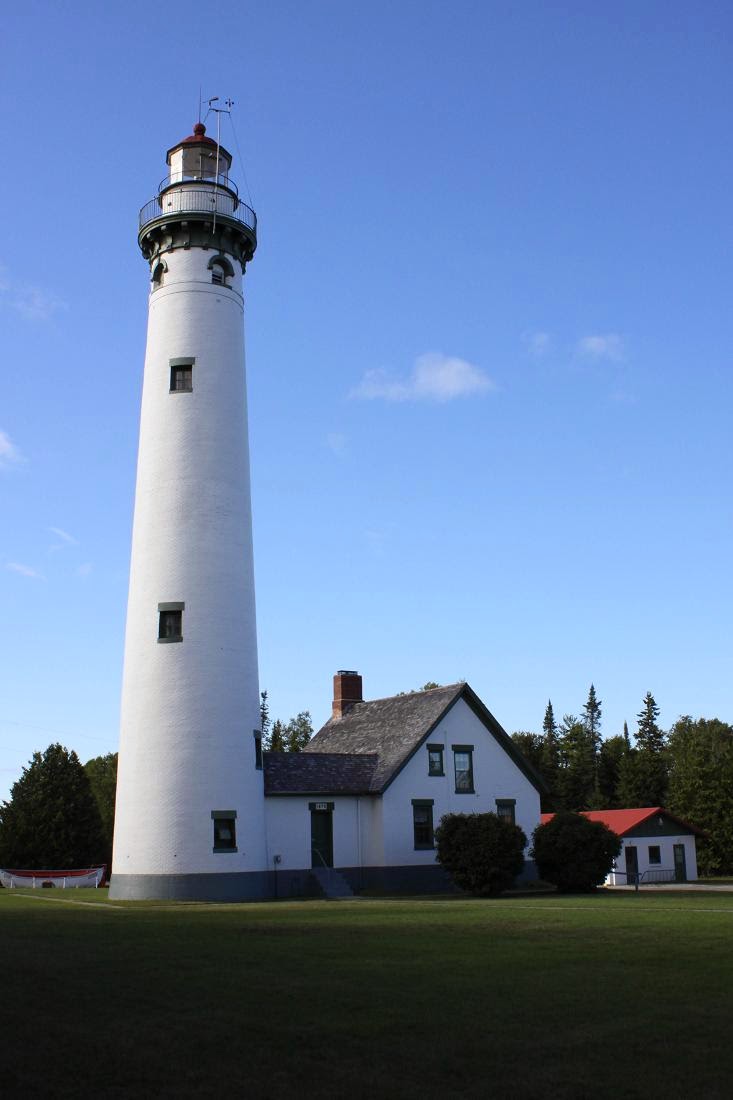 Fairly close to the last lighthouse is the new Presque Isle lighthouse.  This is an example of a lighthouse designed by Orlando Poe. 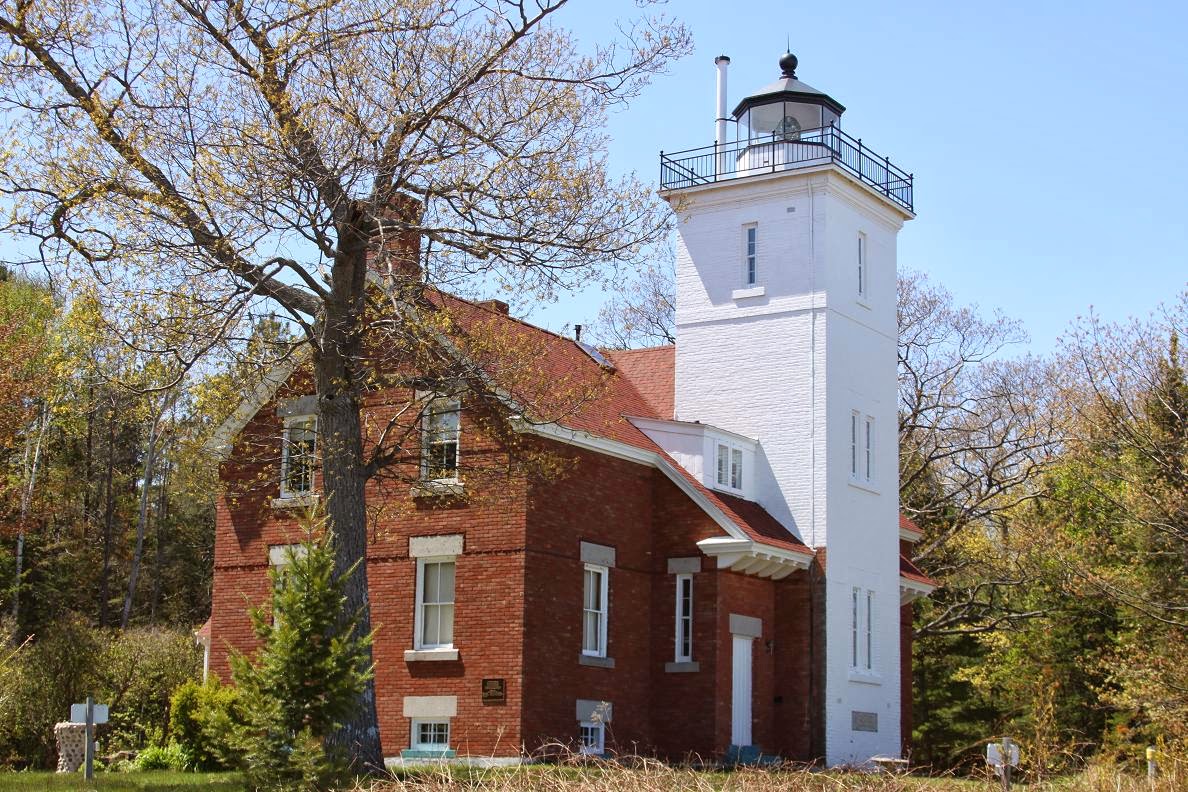 Just outside of Rogers City is the Forty Mile Lighthouse.  The grounds of this lighthouse has an example of a pilothouse from a classic laker. 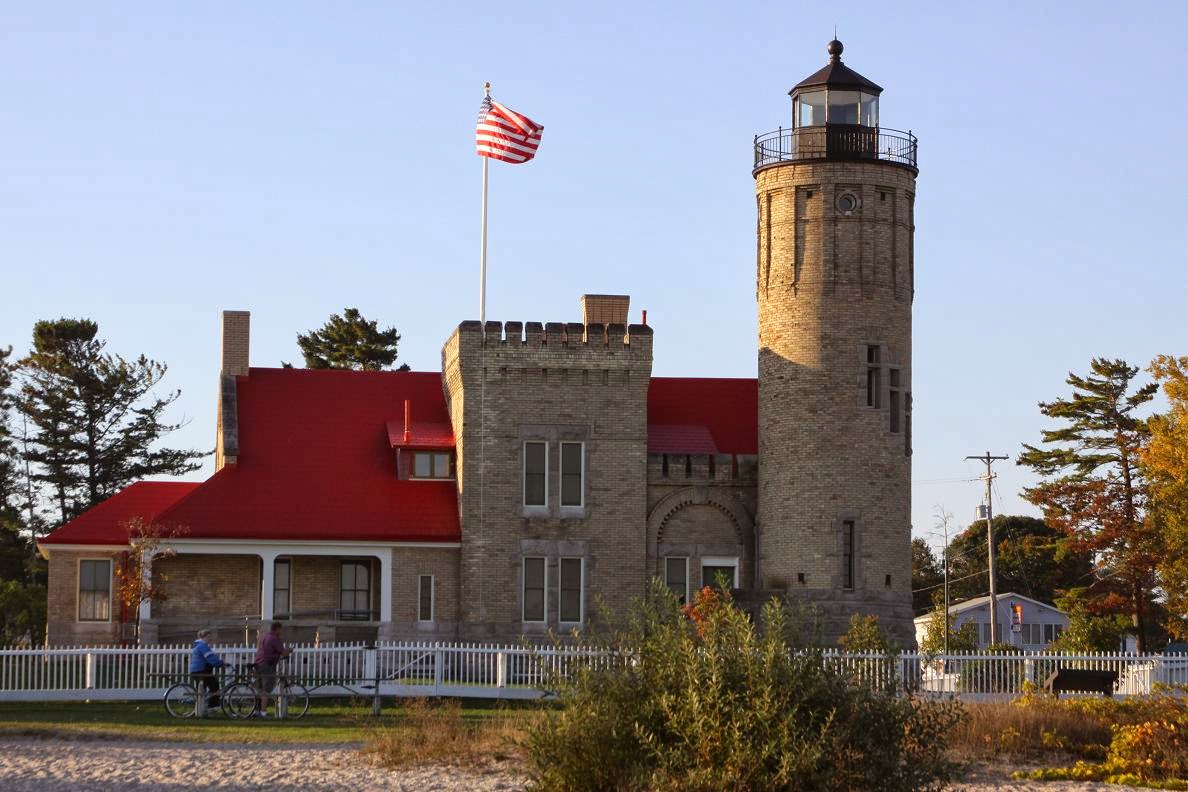 At the tip of the Mitten is the Old Mackinac Lighthouse.  This one is probably one of my favorites but it was made obsolete by the Mackinac Bridge. 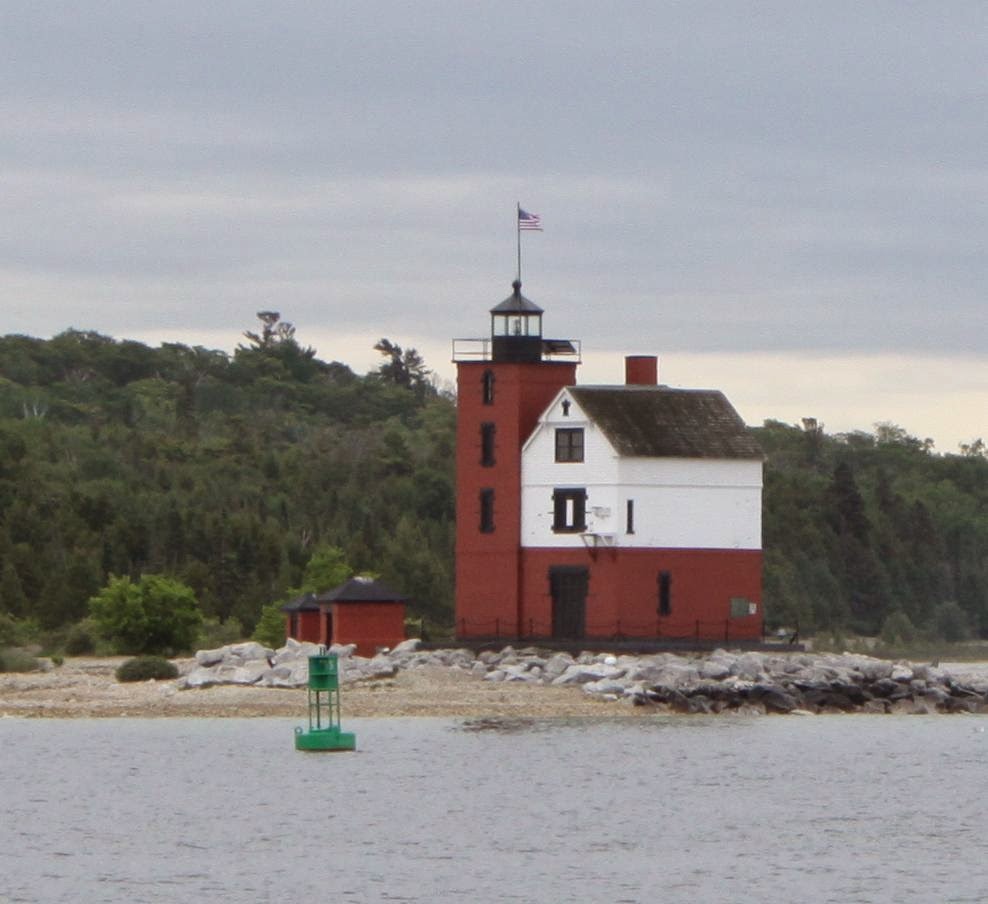 If you take the ferry to Mackinac Island, you will pass right by the Round Island lighthouse. 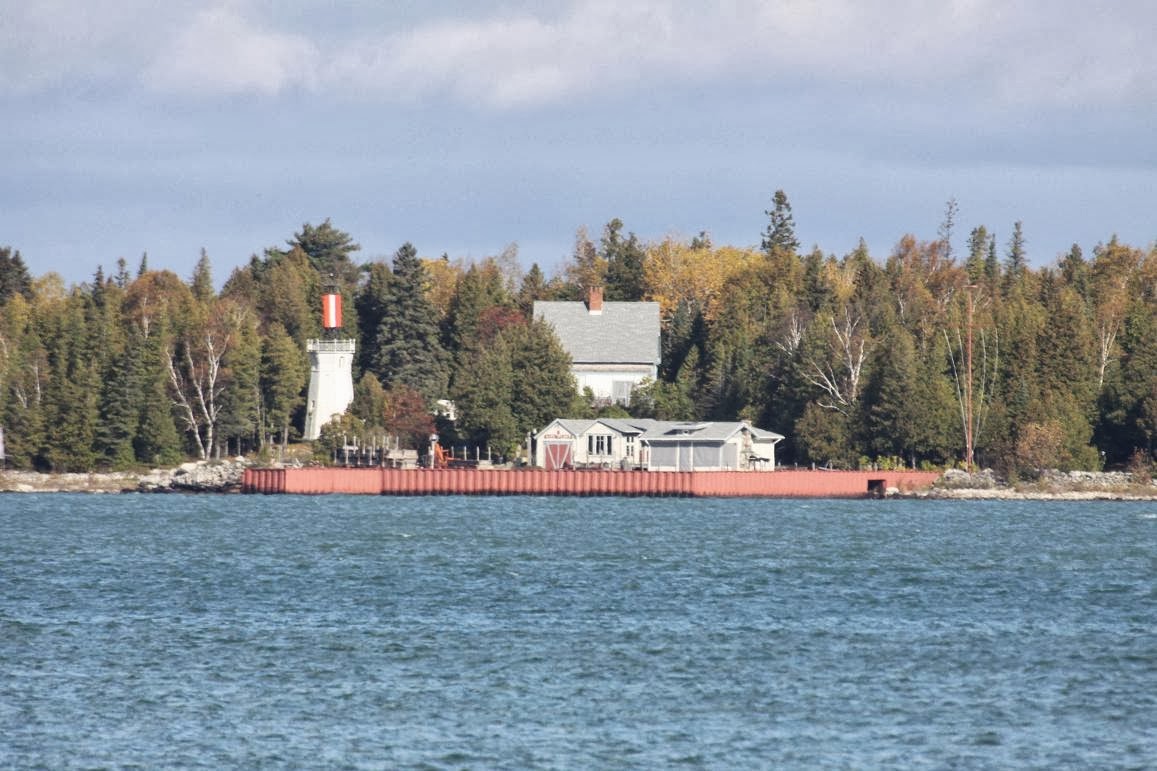 After you cross the Mackinac Bridge, take exit M-134 which will lead you to DeTour.  Just off to the east of DeTour is this range light.  There is also a reef light near DeTour but I've never been to that one.  Apparently, you can be a keeper at that light as well. 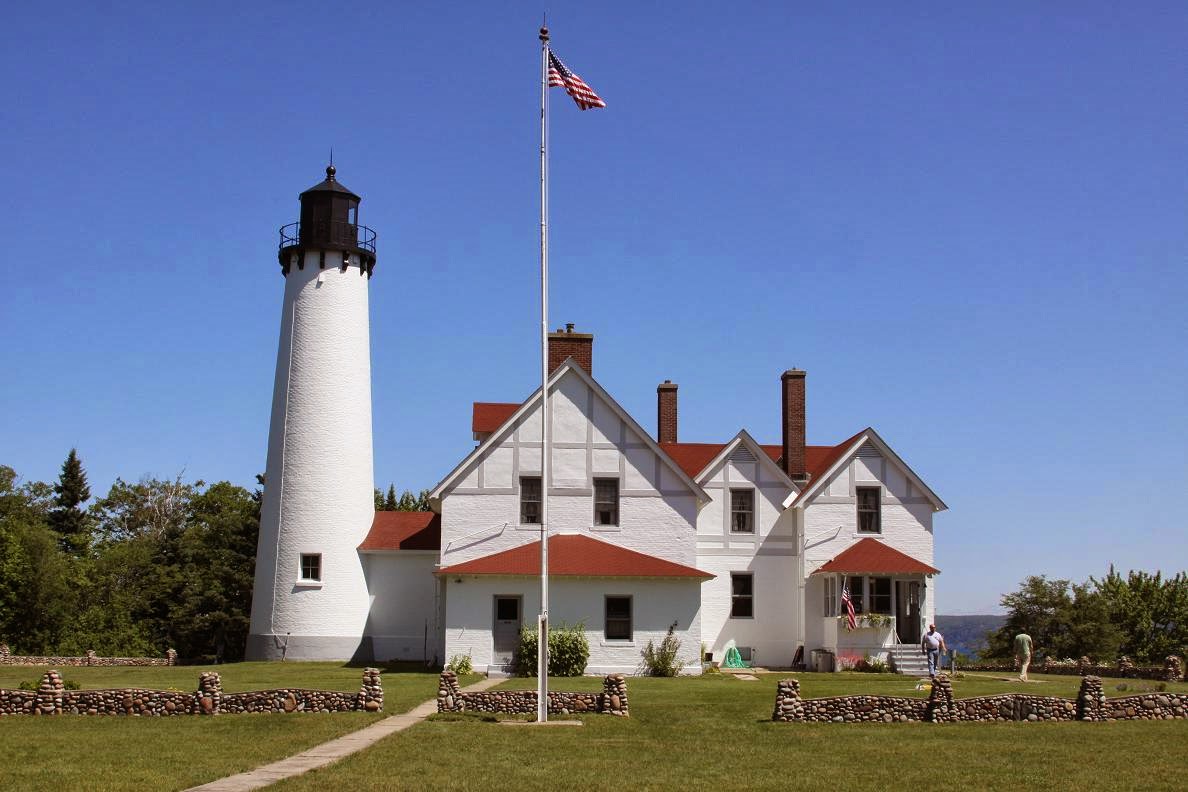 Head north from DeTour and go to Sault Sainte Marie.  Stay there a while and watch the ships go through the Soo Locks.  The better boatwatching in the Soo is probably at Mission Point though.  After you visit Sault Ste Marie, take the Lake Superior drive from there and you will pass Point Iroquois.  This is another light where you can visit the tower.  This lighthouse is another one my personal favorites. 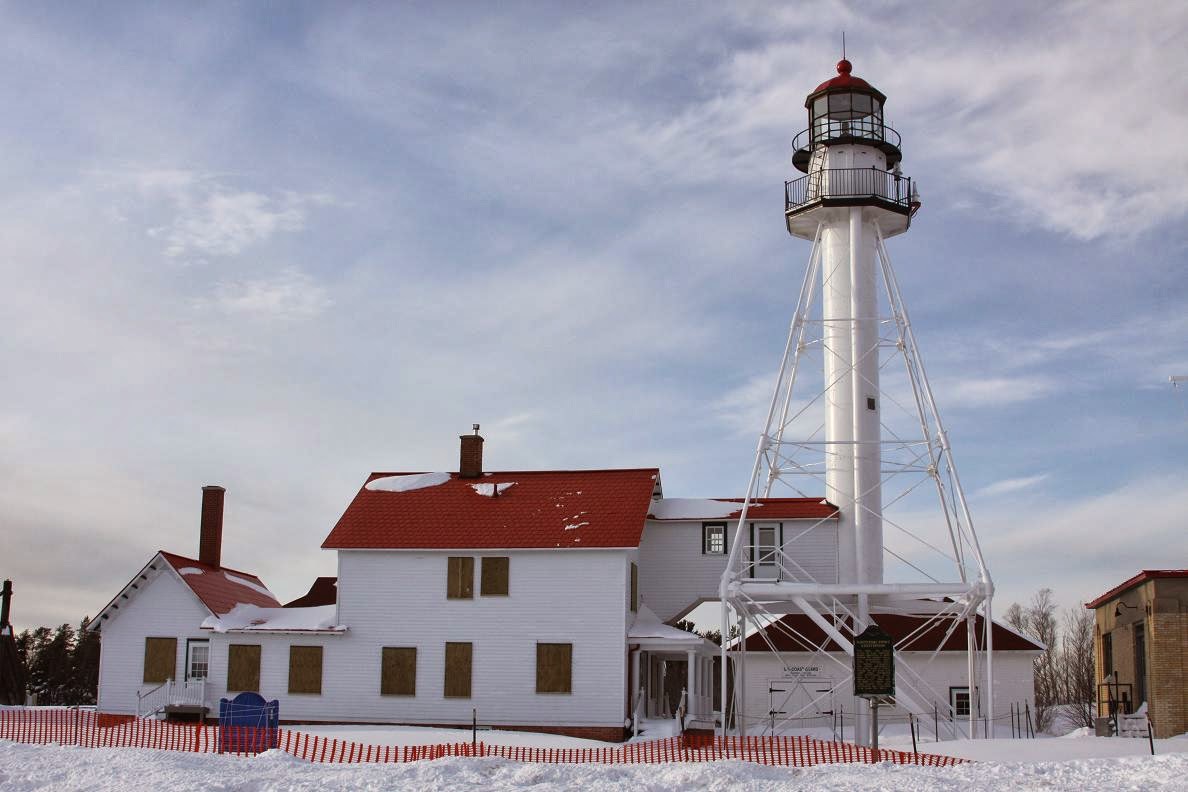 Continue on the Lake Superior Drive and then head up north past Paradise to the Whitefish Point Lighthouse.  This probably one of the more famous lighthouses in the state because it figures in the Edmund Fitzgerald wreck ("The searchers all say they'd made Whitefish Bay if they put 15 more miles behind her" - The Wreck of the Edmund Fitzgerald).  After you visit Whitefish Point, get back on M-123 and head over to the Falls.  Just west of Paradise is a pretty decent place for fish.  If you go there, it was likely the fish was caught that morning. 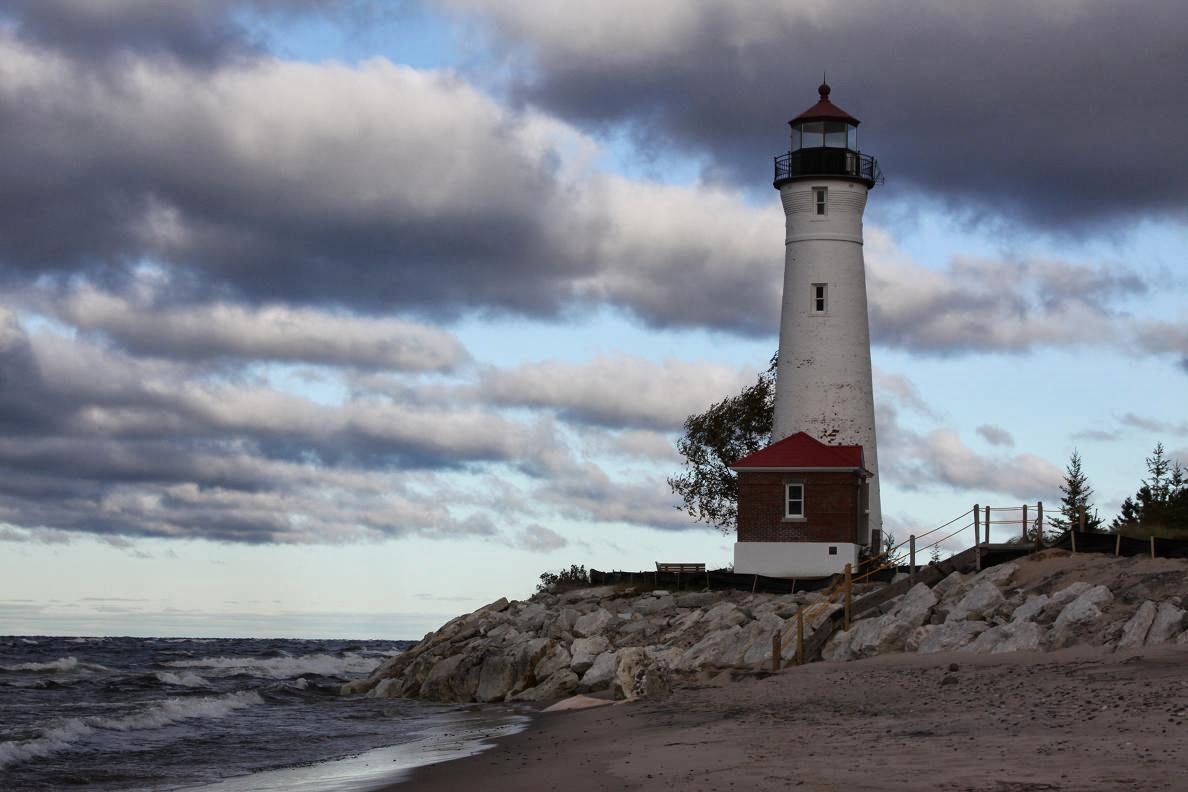 And after you visit the Falls, you need to head over to Crisp Point.  This is probably one of the more difficult lighthouses to get to because it is pretty much all two track dirt roads leading to it.  It is worth the trip though. 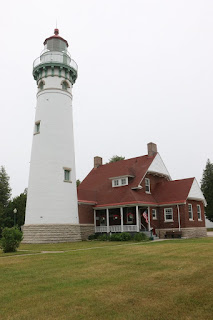 This part is going to be a little out of order again, but if you head back to US-2 and continue west, you reach the Seul Choix Point Lighthouse.   There is sign on US-2 that will point you to it. 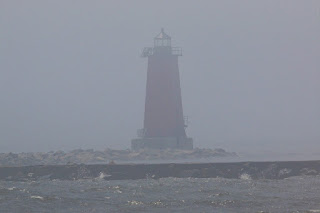 Continuing west on US-2 will get you to the Manistique Lighthouse.  You really can't miss it because it's right off the road.  Unfortunately, I picked a pretty foggy day to head west in the Upper Peninsula.  I still like the picture though. 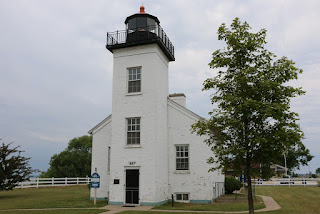 Continuing west on US-2 will get you to Escanaba, where you will see the Sand Point Lighthouse.  There is a nice little park around it.  There is also a little display about the Coast Guard cutter named after Escanaba. 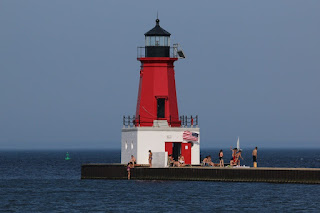 Then you turn to head south on M-35.  When you reach Menominee, you can find the Pier Lighthouse.  It is a really neat lighthouse to see.  You can also see the Marinette Shipyard nearby.  They are currently building the Littoral Combat Ship there.