An Update on My Health

I figured that I would give everyone an update on how things are going on my end.  I had my surgery two weeks ago.  They had to replace my mitral valve, so now part of me is bionic.  The surgery was kind of scary but I made it through.  It's weird to be hooked up to all sorts of tubes and what not.  But that is in the past.
The released me from the hospital to a rehab facility as I still need to get antibiotics.  I am going through therapy and that is going really well.  I expect to fully recover by the time I am released from here.
It looks like the only thing I'll have the change about what I do for here is that I wont be able to take pictures from directly under the basket.  Part of the exchange with the mechanical heart is that I will be on a blood thinner and I don't want to risk the injury.  Other than that, things will be just like normal except I may focus on other things.
Anyway, I'll leave with some older pictures but they are some of my favorites. 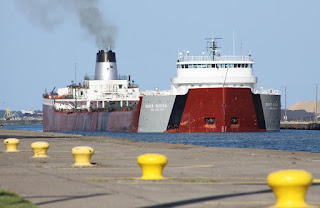 The Roger Blough as she prepares to enter the Poe Lock at Sault Ste Marie.  This day was special to me because it was my favorite boat on my birthday. 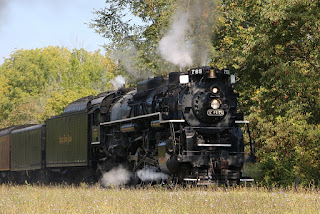 This Nickel Plate 765 from the trip I took this fall.  I hope to see her again this year. 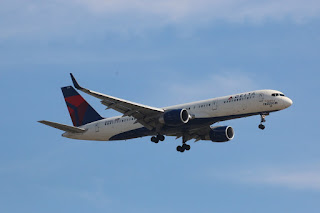 The Spirit of Freedom 757 landing at Detroit Metro Airport.

I hope everyone has a happy new year.
Posted by Mikoyan at 7:15 AM 2 comments:

On Hiatus for a While

The past couple of weeks have been memorable for me.  About three weeks ago, I felt sicker than a dog but I went to work the next day.  My boss said that  I looked like hell, so I went home a slept.  Went to work the rest of that week, but kind of felt like hell.

I ended up catching the Algoma Niagara even thought I didn't really felt like it.  I felt kind of blah on Thanksgiving Week but I went up to my cousin's anyway.  I didn't eat quite as much as I normally too.  On Friday and Saturday that week, I pretty much slept the weekend.

On that Sunday, I had to do my laundry because I thought I had to go to work the next day.  I got the laundry in but barely.  I had a hell of a time standing up.   Someone offered to put my clothes in the dryer for me.  I unloaded the dryer but kind of fell as I was putting my clothes in car.  Someone called an ambulance.

Anyway, I hope to return to my readers soon.  Please pull for me.
Posted by Mikoyan at 12:44 PM 2 comments: