The Delhi Bridge From the Air

So I thought I was going to head over to Grand Haven today.  Unfortunately, I got a late start and I decided to take the back roads over.  I headed over to Huron River Drive, then to North Territorial, M-52 and then M-21.  More on that in the next post. 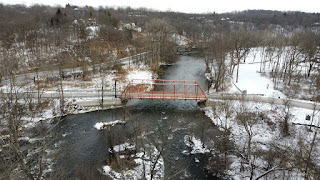 As I was driving down Huron River Drive, I decided that I wanted a picture of one of the truss bridges.  Unfortunately, I couldn't figure out a spot to park near the other one.  There is spot near this one. 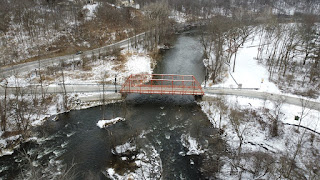 As I launched my drone, I realized that were lots of trees around this bridge, so I didn't take the drone lower.  It was windy but not terribly windy.  I wasn't getting the high wind warnings but my drone was acting funny. 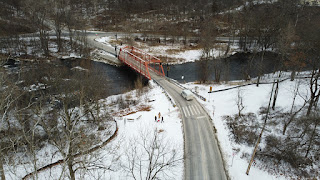 Of these pictures, I think I like this one the best.  I know that I'm gonna have to come back this way.  Maybe have a seat by those benches so I could get a better bead on my drone.