Another interesting building in Sault Ste. Marie was Saint Mary's Pro-Cathedral. I apologize for the poor pictures. The sun was right behind the building and I'm still figuring out some of the settings on my camera. Anyways.

This text is from the State Historical Marker in front of the Cathedral:
In 1853, Pope Pius IX separated the Upper Peninsula from the Diocese of Detroit and established a vicariate apostolic. Reverend Frederic Baraga, a missionary from L'Anse, became vicar apostolic and made St. Mary's Church his headquarters. In 1857 the vicariate became a diocese, Baraga was named "Bishop of the Sault" and the log cabin known as St. Mary's became a cathedral. With the onset of mining, settlements sprang up in the western Upper Peninsula. Faced with the task of serving these remote parishes, Bishop Baraga obtained the pope's permission to move the seat to the diocese to Marquette. In May 1866, Baraga left St. Mary's and the parish became the pro-cathedral parish. In 1881 the present Gothic Revival-style church, designed by Joseph Connolly of Toronto, was erected. 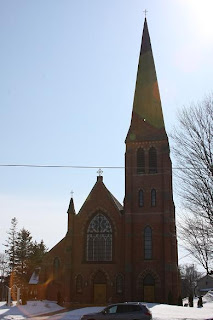 A shot of the front of the church. It is a pretty impressive looking church and this picture really doesn't do it justice. 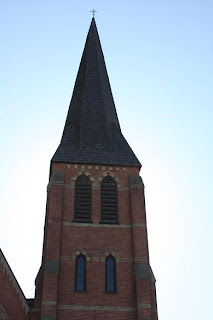 Looking up the steeple. This probably give you more of an idea of the impressiveness.
Posted by Mikoyan at 8:36 PM