As I was waiting for the next ship, I looked out on the river and I saw a bunch of these. 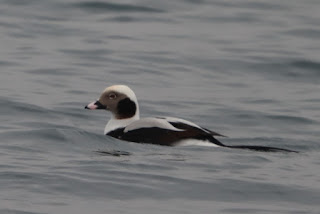 I didn't know what this was, so I asked on a Facebook group.  Someone was kind enough to tell me that it was a long-tailed duck which used to be known as an oldsquaw.  I have no idea whether this one is male or female but it looks pretty neat.  I think with the weather, migratory birds don't know what to do.  It seems like some birds are staying later than normal but I don't know if that's the case with these guys.  At any rate, they look cool.