So I ended up going to the Eastern Michigan basketball game tonight.  It was the first basketball game I have been to in close to two years.  I had difficulties getting to a game last year because of COVID.  It seemed like every game I was thinking of going to was canceled.  I kind of missed taking basketball pictures. 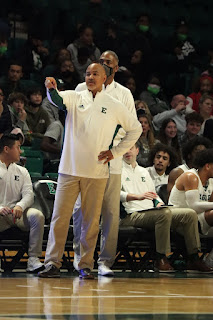 At the end of the season last year, Rob Murphy left the team and became a general manager for a development league team in Detroit.  I will miss him.  He never seemed to be able to get over the hump of a MAC Championship but it seemed like his teams were always in contention.  Eastern Michigan ended up hiring Stan Heath.  He played on the Eastern Michigan team from 1984 to 1987 but I don't think he got all that man minutes.  He bounced around as an assistant coach and got a head coaching job at Kent State and led them to the NCAA tournament.  Then he got a job at Arkansas and led them to the NCAA Tournament.  Then he went to South Florida and he led them to the NCAA Tournament as well.  Then he became an assistant at Boston College and then a head coach for the development league team Lakeland Magic.  He led them to a championship.    I hope that he can bring some of that juju to Eastern Michigan. 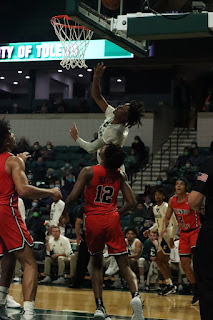 This was my favorite picture from the game tonight.  For other pictures, go to Hustle Belt.  The Eagles won after two overtimes by a score of 103 to 98.