The Qikiqtaaluk W Unloading in Sarnia

I think I've seen this ship before.  After the Munson, I headed back to Port Huron because I was going to head somewhere west of Port Huron.  As I was passing by, I saw a ship that I wanted to get a picture of. 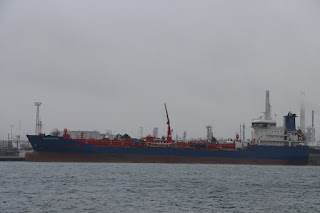 The ship in question was the Qikiqtaaluk W.  She is named after an uninhabited island in the Nunuvik region of Canada.  She is owned by the Coastal Shipping Limited company.  She was built in 2011 and is flagged in the Marshall Islands.  She can carry almost 20,000 tons of cargo.  And it turns out, I haven't see it before.