I went around Belle Isle looking for eagles.  I saw one in a different spot, so I stopped there.  While I was stopped there, I decided to take a picture of this. 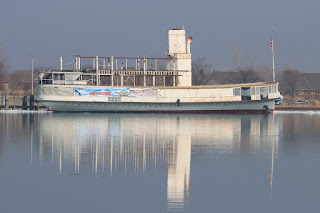 The steamer Ste. Claire was used to take people from Detroit down to Boblo Island which was an amusement park.  When the park was closed, the Boblo steamers were out of a job.  The Ste Claire's sister was sold to a group in New York a couple years ago.  They either have restored her or are in the process of restoring her.  There was a group interested in restoring this one was well.  They were making some progress and then she caught fire in 2018.  The fire took out all of her wooden structure and this is what we are left with.  I'm not sure what the plan is but I hope they can restore her.  I would love to see her used for river excursions or something.