After spending some time at Belle Isle, I decided to head to lunch at Slows Barbecue. I'd never been there but have heard good things about it. It was pretty good. The ribs were pretty good and the mac and cheese was excellent. The fries were kind of meh.

After lunch, I headed down to Riverside Park because I was hoping to catch the mailship when the Indiana Harbor came down. As I was waiting, I looked downriver and noticed a pair of ships coming upriver. Since I wasn't expecting either of these, they were bonus ships for me. 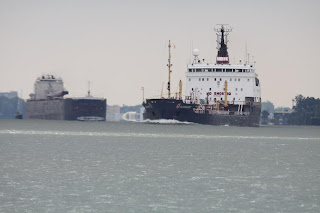 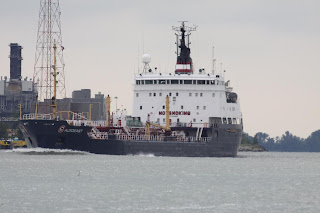 The Algoeast started her life as the Texaco Brave for her owners Texaco Canada. She was built by Mitsubishi Heavy Industies in 1976. She is a single hulled tanker. 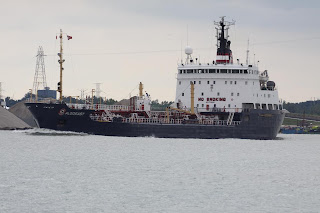 She is powered by a 5,300 horsepower Hitachi Diesel Engine and can reach almost 16 miles per hour. She is 431 feet long and can carry almost 65,000 barrels of liquid. 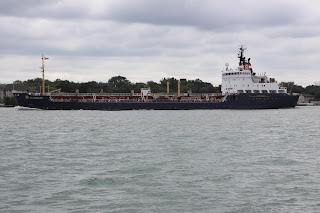 She sailed for Texaco Canada until 1986 when she was sold to Imperial Oil and became Le Brave. 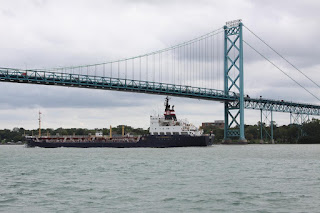 She was laid up in 1996 and had a collision which damaged her foredeck and bowspirit. In 1997, she was repaired and repainted. At this time, she was named Imperial St. Lawrence. 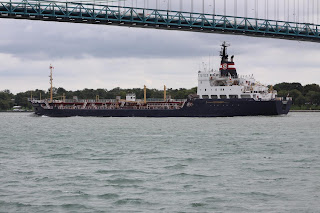 In 1998, she was bought by Algoma and renamed the Algoeast. She was also converted to a double hulled tanker. This was the first completed at the Port Weller Yard. 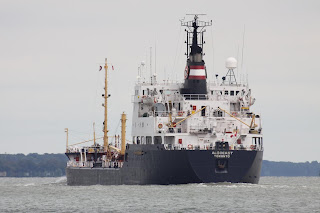 Since 2000, she has been sailed under the Algoma banner. She's had a couple minor incidents.
Posted by Mikoyan at 8:57 PM