So I got my chance to do my first game on the sidelines today since the game last night was postponed. I'll have to say that it was pretty cool, the angles are alot better than sitting in the stands but I don't the photography is as easy. But more into that when I post the pictures from the game.

Eastern Michigan was playing Howard University today for the second time in their history. The Eagles defeated them in 2007, 38-15. Howard was founded in 1867 and named after General Oliver Otis Howard and is a traditional African-American University outside of Washington D.C. They are a Division I-AA team (sorry...can't bring myself to call it FCS). Last year they were 1-10. 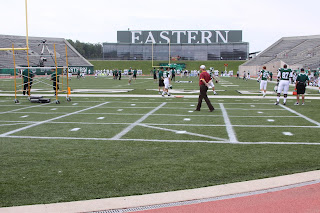 A shot of the field from down on the field. I will have to say that it looks alot better than it did when I was a student there. The Convocation Center in the back adds alot to the look and makes it look more like a University Football Field. I'm still not entirely thrilled with the home side stands but oh well. 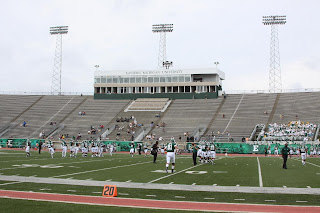 A shot of the home stands. Rynearson Stadium holds about 30,000 after the construction of the visitor side stands in 1992. The stadium is named after Elton Rynearson who was a football coach for Eastern for 26 seasons and he compiled a record of 114-58-15. From 1925-1930, he compiled a record of 40 wins, 2 ties and 4 losses. He was easily Eastern's most successful coach. 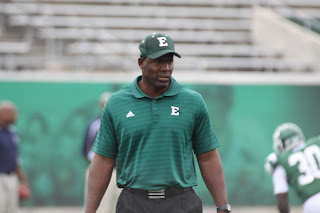 I think this is Ron English, who is the current coach. His record (2-21-0) at EMU is not nearly as good as Rynearson's. Something tells me that this is the year that he is going to have to something good. 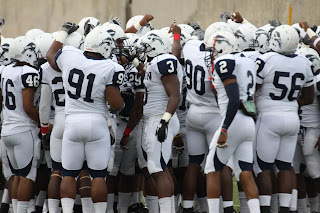 A shot of the Howard University Bisons before the game. 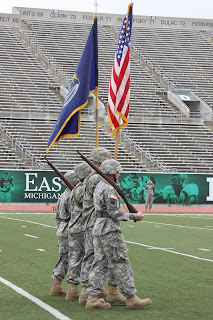 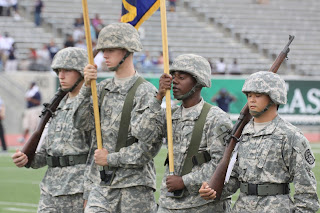 The Color guard coming back. 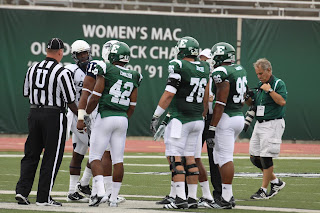 The team captains prior to the coin toss.

"I think this is Ron English, who is the current coach. His record (2-21-0) at EMU is not nearly as good as Rynearson's."
I'll say. Dry humor always makes me laugh.

Thanks. I try not to be too snarky but sometimes situations make it too easy.