So today I got the opportunity of a lifetime by getting a chance to take pictures from the field at the Big House. I want to thank the author of Eagle Totem f0r giving me the chance to be his staff photographer because that gave me this chance. Anyways, I have been giddy ever since I got the e-mail from Michigan stating that my photo credentials were approved. And today was the day. 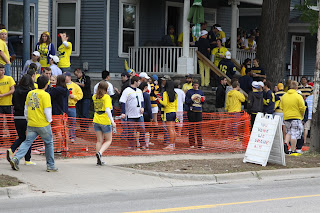 I thought this picture was pretty cute. A dad taking his son to the Big House. For the kitchiness, I would say this was the kid's first game but I overheard them talking about one of the building being built. But I still like the shot. 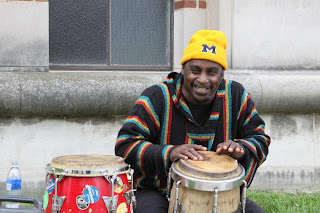 I've see this guy around town before. Unfortunately, I didn't have any small bills for him. 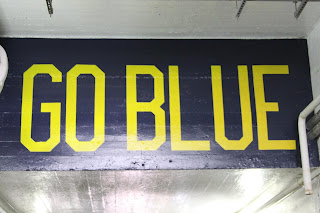 The moment I've been waiting for, the chance to go through the tunnel. I was pretty awed last week when I stepped on the field where Tigers Stadium was and this was even more awing. I think about all the people that have passed through this tunnel....Fritz Criser, Bo, Lloyd Carr, Charles Woodson, Ricky Leach and too many others and it was cool to be in the same place. 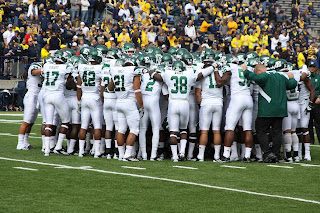 The Eastern Michigan players gathering before the game. As I've said in my introduction, I graduated from Eastern Michigan and I have a soft spot in my heart for the Eagles but I've grown up rooting for the Wolverines. So in a game like this, I hope for a good game where nobody gets hurt. 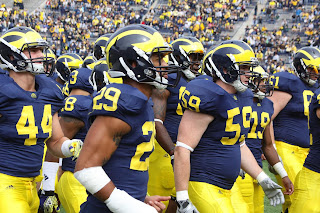 The Wolverines as they head back into the tunnel. 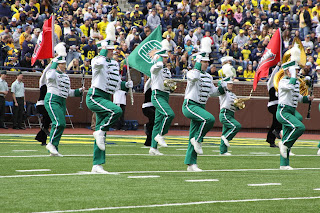 The Eastern Michigan band taking the field. I think they sounded pretty good. 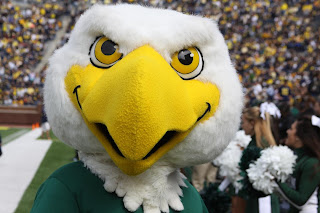 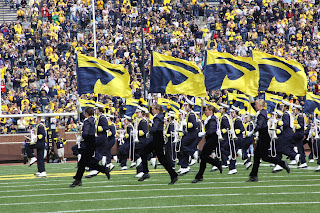 The Michigan band taking the field. I think the vantage for the band is better from the stands but this wasn't too bad. 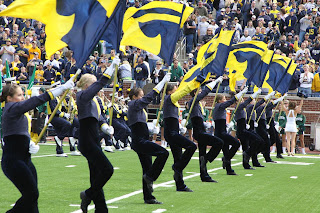 The band during "The Victors". 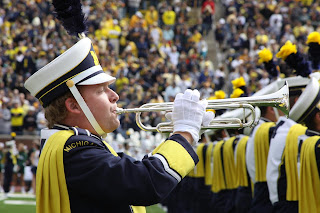 One of the band members. 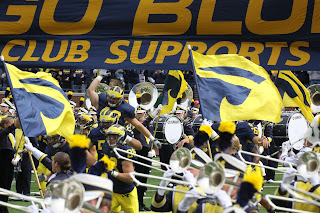 One of the traditions at Michigan is the players running out of the tunnel and touching the above banner. I tried to get a better vantage point for this as this is a traditon I enjoy but they moved me away. 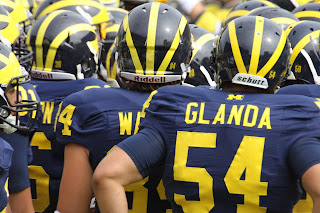 The Michigan players gathered before the game. 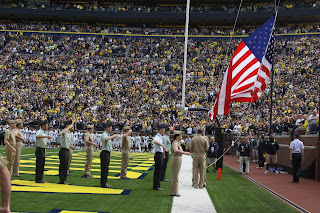 The Star Spangled Banner. There's an old joke, "I always thought the last two words of the Star Bangled Banner were play ball". Anyways, I thought this was pretty cool. 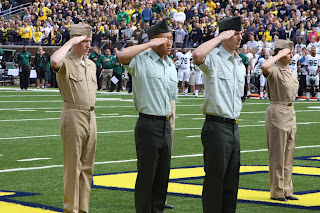 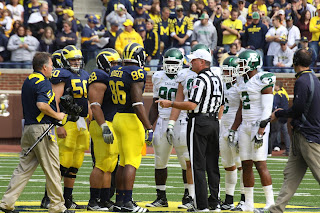 The coin toss. I didn't hear the results of the toss.
So far so good and I will post pics from the game itself later.
Posted by Mikoyan at 3:33 PM

Great pictures, Mikoyan.
As for the Bongo guy...http://www.youtube.com/watch?v=UD5Gk2Cx5gs

Thank you for that link, it was pretty cool.

awesome pics! by chance do you know where fans can by pictures that were taken when entering the stadium? they gave us a card to view onine and i lost it.. thnx