Since the place where I ate lunch was pretty close to Tigers Stadium, I decided to wander over there. They've pretty much demolished all of it. The only signs there was a baseball field here are the infield and some of the fencing. 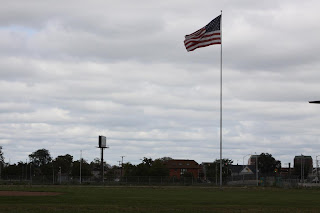 This is the flag that would have flown over Centerfield in roughly the area that Cecil Field would have wowed us with some of his home runs. 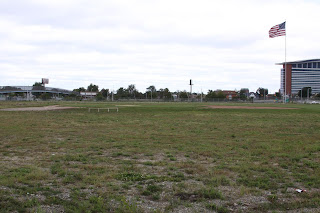 As I approached the field, I noticed that there was a gate open, so I decided to walk onto the field. Even though the stands aren't there, I could still feel a sense of awe as I was standing in the same place that Al Kaline played. Also, this is where Bobby Layne played during the last time the Lions won an NFL championship. 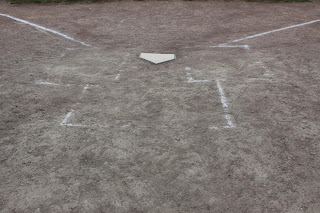 Looking down at home plate. 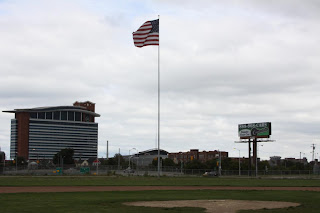 Looking at the Centerfield Flag from around home plate. To the left is the Motor City Casino. 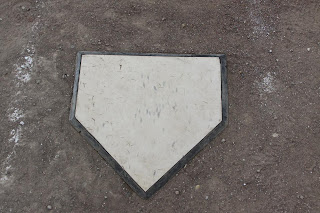 Home Plate. Something tells me that this is not one that was used by the Tigers. I think there have been some groups maintaining the field since it was closed in 1999. It would be nice if some form of baseball were played here again. 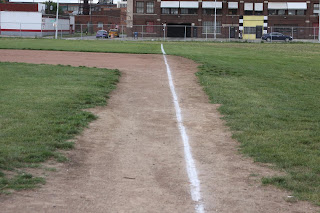 Looking down the first base line. I try to think of how many Major Leaguers have run down this very line. It's sad to think that wont happen again. 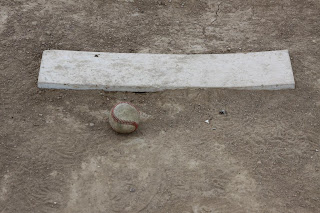 The pitcher's mound. It was kind of cool that someone left a baseball behind. I left it there after I took the picture. 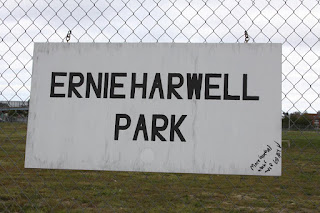 There is a movement to make this an official park but the City isn't sure what they want to do with the land. 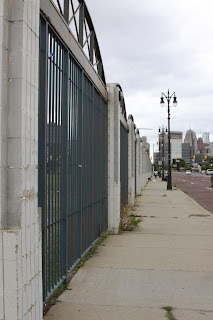 Some of the fencing. 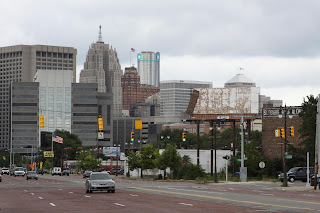 The view of Detroit from the stadium. 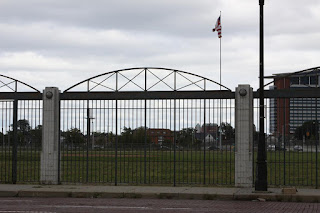 Another view of the fencing.
I couldn't help not getting overcome as I walked out on the field. I'm not sure how many games I've seen here but it's been quite a few. I wasn't able to make it to the last game here but I did make it to the second to last game. I went to quite a few games in the last season of Tigers' Stadium. Sadly, the Tigers weren't very good that season (although they would get worse).
The amazing thing is that with all the decaying buildings in the city, they were able to tear this one down as quickly as they did. I mean, the Railroad Depot has been decaying for at least 20 years, yet it stays up. A building that people would have tried to care for gets torn down....go figure. Hopefully the city will figure out what to do with this ground.
Posted by Mikoyan at 10:00 PM