I wasn't terribly happy with my pics from last night. They weren't bad but night shots are tough and given that I didn't have a tripod, it was doubly so. So I decided to stop by the Stadium on the way home from work tonight. It was kind of a warm day today though but not too bad. I hear tomorrow is going to be worse. 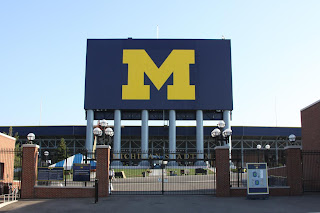 As I said in my post yesterday, they redid the scoreboards at Michigan Stadium to something more state of the art than what they had. Unfortunately, I probably wont get a chance to see the other side until sometime later this season. I may try to get tickets to the Homecoming game and possibly the Buckeyes. Until then, this is what I've got. 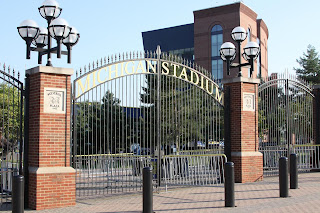 This is the northwest gate of the stadium. I kind of like the traditional brick look of the gates. These wouldn't look too out of place in the 30's. 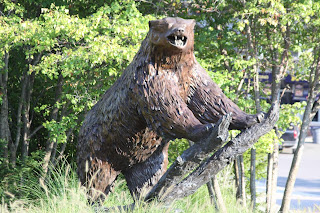 This is supposed to be a wolverine...I think. It looks more like a cross between a bear and Wolverine from X-men. 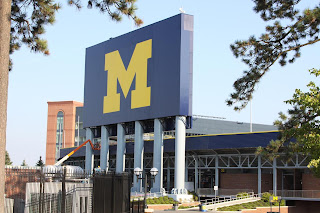 Another angle of the scoreboard. You can also kind of see the skyboxes that were added before last season. At first I didn't like them, but now that they are complete, they do fit in with the overal architecture of the Stadium. Because of these, the Big House is the Big House again. 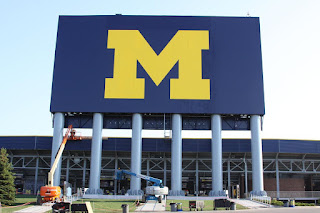 Looking at the back of the scoreboard straight on. I really like the low key Block M on the back. When I say low key, I mean simple. The scoreboard is definately not low key as it towers over everything. 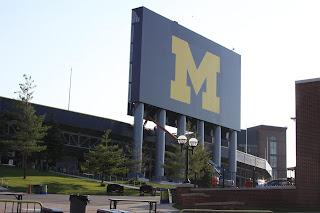 Another angle of the scoreboard. 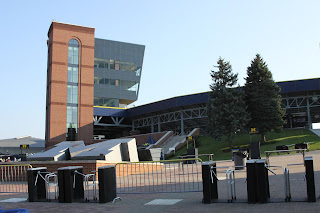 A view of the side of the skyboxes. The back has a classic brick look to it.

I am completely in love with the first picture. I could stare at it all day. The "Wolverine" statue has always been an, um, "period" feature of the Stadium complex for me. I think he looks more like a big o teddy bear.

It's too bad the Ferry Field gate is gone. At least we still have the Big House gates to admire. I made most of my entries as a student at the Northeast gate mostly, but Northwest and North came in handy too.

The fourth picture is great too. I love how I can see a panorama of the new architectural features of the stadium. The semicircular window motif always looks cool on a stadium IMO, but those luxury box windows took it to a whole new level. The University is making a statement: We're here to stay as a football power.