The American Spirit in Whitefish Bay

Unfortunately, all things must come to an end and thus was the case with my time at the Soo Locks.  My dad wanted to go to the Tahquamenon Falls, so we ended up taking the scenic route there.  I don't think it takes longer to go that way but it is a much better view.  As we passed Brimley, I looked out towards Lake Superior and saw a ship making its way towards the Locks.  Of course we had to stop so that I could take pictures. 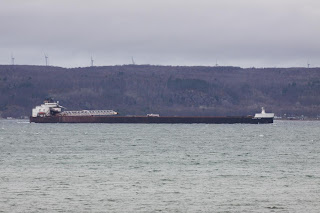 It turns out that it was a ship that hasn't appeared on this blog before.  She is named the American Spirit and is one of the 1000 footers.  She was the seventh of the 13 thousand footers and was the only one to enter service for the National Steel Corporation of Cleveland, OH.  Like many of the other thousand footers, she was built in two pieces and welded together in Lorain. 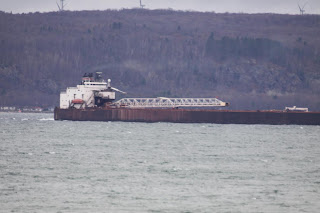 Her construction was completed in 1977 and she was originally named the George A. Stinson.  She is powered by two Pielstick Diesel Engines and has a total rating of 16,000 horsepower.  She can carry a load 62,000 tons. 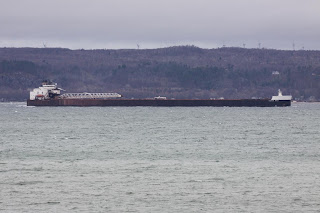 In 2004, she was bought by the American Steamship Company and renamed American Spirit to commerate the spirit of the company's workers and the workers of America.
Posted by Mikoyan at 6:15 PM