The Paul Tregurtha Leaving the Locks

After the Lee Tregurtha, we decided to head back to the hotel room as it had been a long day at this point and I wasn't sure when the next ship would be making her appearance.  Fortunately, we got a room on the side of the hotel that was facing towards the Locks and it had a pretty impressive view of them.  So I was sort of dozing off and checking ais.boatnerd.com and saw that the Paul Tregurtha had passed through the locks.  So I waited. 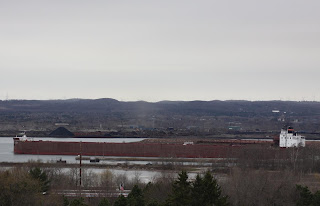 The Paul Tregurtha is a ship that I've been waiting to get a picture of for a long time.  It seems like she would pick inopportune times to go through the Detroit River so I never got a chance to get a picture.  Not this time. 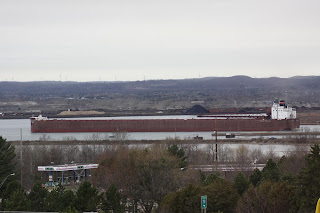 With a length of 1013 feet, she is the longest of the ships that travel the Great Lakes and holds the title of "Queen of the Lakes".  She has held that title longer than any other boat on the Lakes (the last holder of that title was the Carl D. Bradley that held it for 22 years).  She was the last of the 1000 footers to be constructed. 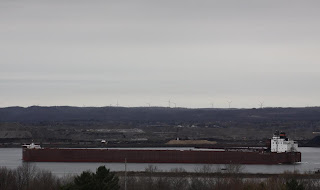 She was constructed in two sections.  One in Toledo and the other in Lorain, Ohio.  The section built in Toledo was towed to Lorain to be mated with the section there.  Construction was completed in 1981 and she was christened the William J. De Lancey.  She is powered by two Colt-Pielstick diesel engines with a total rating of 17,120 h.p.  She can carry 68,000 tons of cargo.

She was the last ship built in Lorain, Ohio.  Because of some of the amenities of her construction she was nicknamed "Fancy DeLancey". 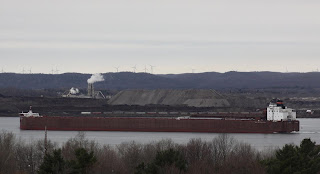