Today was the day I have been waiting about two months for. That would be the opening of the Soo Locks. The Welland Canal opened a couple of days ago, so now boat season is upon us again. 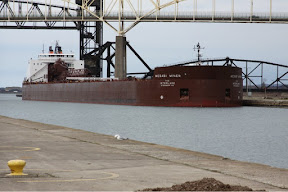 The ship above is the Mesabi Miner making her debut on Michigan Exposures. Since I am posting from my iPad, I am not going to go into details on this page. I will tell you that she is one of the thousand footers. It was pretty cool because originally they were going to open the Locks at midnight. Instead they decided to open them at noon.

As I write this I have seen the above ship, John Munson, Stewart Cort, Lee Tregurtha and the Paul Tregurtha. It doesn't look like there are any more ships today. Which is probably good because it has been a long day.

- Posted using BlogPress from my iPad

woohoo! well done! you pulled strings so that opening was at noon rather than midnight? just kidding.

I hope you have a place on the water to watch all these freighters go by! Did you explore the museum freighter Valley Camp while you were up in the Sault? It's awesome!

The date I am always in anticipation of is APRIL 1, when Erma's Frozen Custard in downtown Utica opens. They have been there since 1942.
Suzie