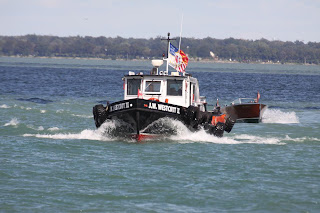 So it's that time again.  Namely where I post a picture of the Westcott and answer questions and comments that have been posted on my blog.  I've been getting a few more comments lately and I appreciate them.

To the people that posted from the Belle Isle Aquarium.
Thank you for your posts and I hope that there was a large enough turnout at the Shiver on the River to justify reopening the Aquarium.  From the sounds of your posts on Facebook, this is becoming a reality.  I really hope so.

In regards to the Detroit Churches.
Yes, I will try to get inside one of these days.  Like I said when I made the posts, if they looked that cool on the outside, I can only imagine what the insides look like.

To the folks from Bay City that posted.
Yes, it was Billings.  I used to go there all of the time when I was kid.  They had lots of neat trinkets.  It is a shame that they closed down.  But then again many stores that gave Bay City character closed down.

My valentines day got a bit more traffic.  Thanks for that.

Is the ice tree still on Belle Isle?
The tree is but it wasn't covered with ice when I went down there.  I'm hoping this remains the case.

Viagra or Cialis?
Seriously people, quit leaving your spam comments on my blog.  I think it's great that you think I have enough traffic to warrant that but still.  I don't understand Russian, Polish or Spanish.  I don't really care about helper drugs.  I don't want a Prada purse.  So leave me alone...please?

So the Westcott heads back to its spot by Riverside Park in Detroit.  Another mail session complete and another freighter on its way upbound or downbound.  As always, feel free to leave comments and I will address them in the next session of the Westcott.
Posted by Mikoyan at 10:49 PM