The Mesabi Miner Passes Through the Locks

So the moment I had been waiting for had finally arrived.  I would get to see which would be the first ship to pass through the Soo Locks for the 2012 shipping season.  That ship would be the Mesabi Miner.   For a while, I thought that I wouldn't be able to share these pictures.  As I was messing around with something, accidently hit the Format Card button on my camera.  Fortunately, my dad was with me and he told me that the pictures may not be completely lost as long as I didn't use the card.  So I put my backup card and waited until I got home.  After perusing a couple blogs, I found a program that would restore my pictures for me, so here they are. 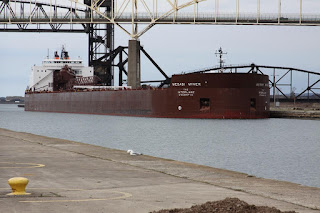 So as I said, the first ship to pass through the locks this shipping season would be the Mesabi Miner.  This would also mark the first time that she has appeared on this blog, so I would go over here history.  This is a shot as she was waiting patiently for the Locks to open.  I could swear I could hear her diesels say, "Come Onnnnnnnnnnn". 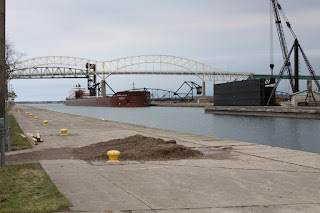 The Mesabi Miner would be the fourth 1000 footer to be built.  Her bow and stern were produced at the American Steamship Lorain Ohio yards.  Her midsection was built in Toledo.  All three sections were mated in Lorain.  Construction was completed in 1977. 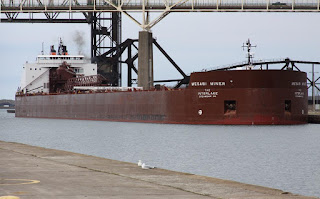 She was one of several ships built under Title XI of the Merchant Marine Act of 1970, which allowed American shipping companies to modernize or build new ships with guaranteed government loans or tax benefits.  I don't normally get into politics on this blog but this is a use of government money that I actually support.  I think shipbuilding is an important industry and we should do as much of it here as possible.  But sadly, other countries can do it cheaper. 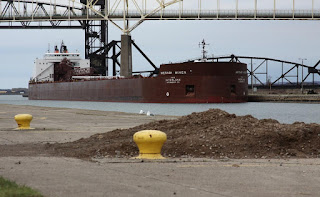 When she was launched in 1977, she was christened the Mesabi Miner.  She is 1004 feet long and can carry 63,000 tons of cargo.  She is powered by 2 Pielstick Diesel Engines with a total rating of 16,000 horsepower.  This gives her a speed of about 15 miles per hour.  She was the first vessel of this size to navigate the Saginaw River. 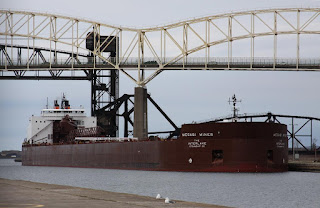 Getting pretty close to Noon. 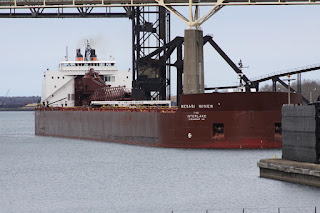 She is approaching the lock. 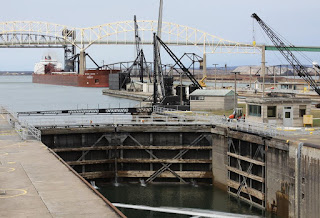 I put this picture in so that you could see the little sliver of ice at the bottom of the MacArthur lock. 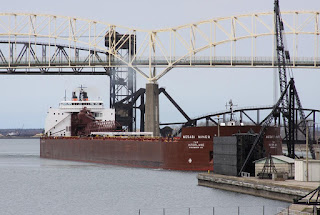 The Mesabi Miner enters the Poe Lock.  The Poe Lock is 1,200 feet long and is probably the busiest of the locks. 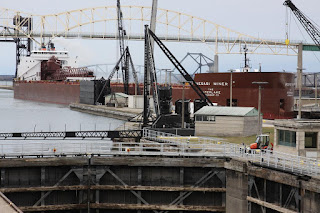 Here she is passing the gate. 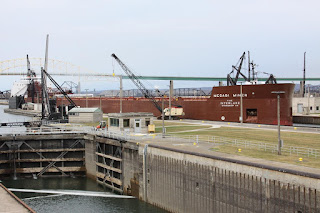 It was pretty cool to be here for this moment as there were quite a few other boat enthusiasts along with me.  I think this was the first time the locks were opened in the daytime.  I hope that this continues to be the case because I think it makes for better pictures. Almost in the lock. 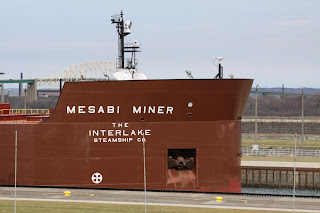 Just a shot of the bow. 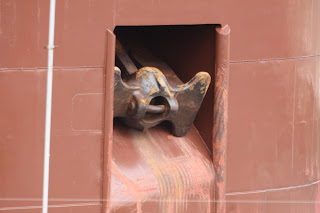 And a shot of the anchor. 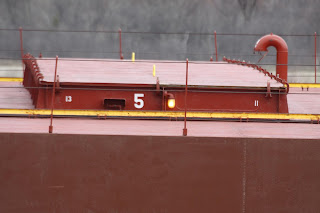 And one of the hatches. 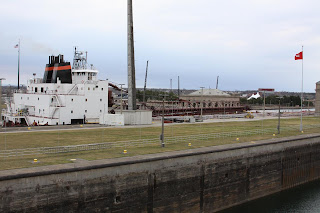 Roughly 30 feet lower and she's on her way to Lake Huron. 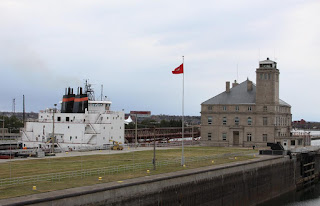 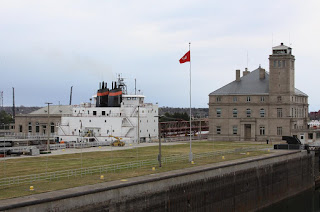 And almost out of the lock.

I am looking forward to doing this next year.
Posted by Mikoyan at 7:04 PM