A History of Aviation in Three Models

If you've followed this blog at all for any length of time, you know that I have a pretty extensive collection of die cast models at work.  I have a pretty good collection of Navy aircraft and a few Air Force planes.  It spans from World War II to now.  As I was looking at my models, I thought a brief aviation history would be kind of cool. 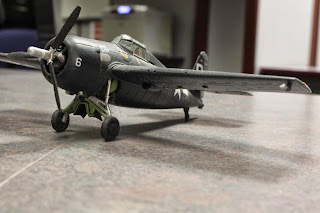 In 1941, the Navy's fighter aircraft of choice was the Wildcat.  While it wasn't as maneuverable as the Zero, it was better armed and armored and could outdive the Zero.  The plane was probably the Navy's mainstay for the first year or so of the war as the Hellcat was introduced.  The Navy continued to use the Wildcat throughout the war and steadily improved it during that time.  The above is a later war version based on one that fought during the Battle of Leyte Gulf in 1944. 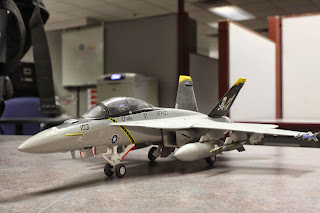 The F/A-18 Super Hornet is the Navy's current mainstay.  It was introduced in 1999 and is an improvement over the regular Hornet that was introduced in the early 80's.  It can fly faster, further and carry more armament than the Wildcat.   While it's a cool plane, I don't think it is as cool as some its predecessors. 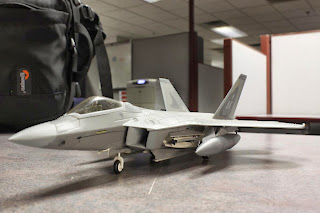 The current fighter of the Air Force is the F-22 Raptor.  In theory it would be a good plane but even after 20 years of development there are issues with it.  It has the ability to supercruise which means that it can go supersonic without kicking in the afterburners.  It has stealth characteristics and if I remember correctly, the engines have some vectoring capability to give it improved maneuverability.  With it's cost overruns, it represents what is wrong with modern military procurement but once the bugs are worked out, it may be an acceptable plane.
Posted by Mikoyan at 9:15 PM