If you're like millions of internet users, you too are bombarded with spam messages in your inbox.  If you write a blog, you may even find a few comments made that are spam.  Typically they are in broken English and will state how much they like your blog and then there is a link embedded.  Do not click on said link, you probably will not like the results.  If you do click on the link, your virus checker will probably go nuts. 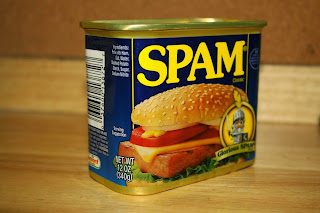 Spam is a pre-cooked meat product that was invented by Hormel Food Products in 1937.  The name was created by Ken Daigneau who was the brother of one of the Hormel executives at the time.  He won $100 as part of a contest to come up with the name.  What the name actually means is a secret but rumors say it stands for Specially Processed American Meat or "shoulders of pork and ham".

The ingredients of Spam are chopped pork shoulder meant with ham meat added, salt, water, modified potato starch, sugar and sodium nitrite as a preservative.  The glaze comes from the cooling of meat stock.  Of course it is a legendary mystery meat.

Spam is particularly popular in Hawaii and they make a dish called spam musubi which is spam, seaweed and rice wrapped in a roll.  It also is popular in Britain as a result of it being one of the few foods they could get after World War II.  They make a dish called spam fritters which is spam fried in a batter.  Spam is produced in Austin, Minnesota and Fremont, Nebraska.  There is a restaurant dedicated to Spam in Austin, MN. 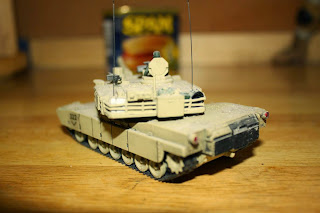 Now for the other type of spam.  The first form of spam emerged with the invention of the telegraph.  Western union used to allow the sending of multiple telegrams to multiple destinations.  The first recorded instance of an unsolicited telegram was in 1864 when some British politicians received telegrams for a dentist.  The practice carried up to the Great Depression.

Of course, that's not the kind of spam that floods your inbox.  The first instance of internet spam was in 1978, when someone sent an advertisement for DEC computers over ARPANET (the precursor to the Internet we know and love).  Reaction to that was similar to people's reaction now, but enough people bought stuff that it was seen as an effective marketing tool.

It is probably called "spam" based on a very famous Monty Python sketch.

The first major commerical incident of spam occurred in 1994 when a couple advertised immigration services.  Sadly, spam is not going away because there are always enough suckers who buy whatever product advertised that it is very cost effective.

So the next time a Nigerian Prince asks you to send him a check for whatever amount of money, remember this post.
Posted by Mikoyan at 5:12 PM