A Followup of Sorts

I ended up taking a convoluted route home from South Haven.  First I passed through Kalamazoo and when I got to I-69, I decided to head south in order to take US-12 home.  Since Coldwater was nearby I decided to stop there first. 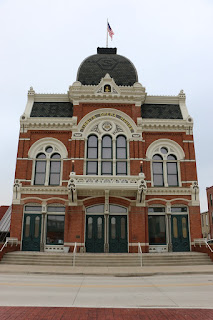 As I looked at this building, I was pretty certain that I saw it before.  And then I remembered that I took a picture of it when I did my blog series about traveling on US-12 from Detroit to Chicago.  At that time, the building looked like it was in pretty sorry shape but it also looked like there was some effort to restore it.

Tibbits Opera House was built in 1882.  Because Coldwater was on the main rail route, it was considered a vacation spot for people from both Detroit and Chicago.  In the 1920s, live entertainment gave way to movies.  As the main routes shifted from Coldwater, the Opera House fell on bad times.  Restoration efforts began in 2002 and it was decided to restore it to its original glory.  The effort was complete in 2013.
Posted by Mikoyan at 2:38 PM