I couldn't put these in another post, but they are both related, so I'll post them here. 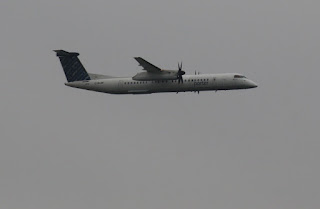 I knew that there was an airport in Windsor.  Occasionally I hear planes taking off from there but I don't think I've ever had a good vantage point of one.  On Saturday, I got one.
This is the DeHavilland (now Bombardier) Dash 8.  The Dash 8 was born out of the Dash 7 project in the 1970's.  DeHavilland was developing a short field capable aircraft for use from smaller airports.  It was powered by four engines.  The only problem was that only a handful of airlines were interested in it as they were trying to reduce operating costs.
In 1980, the DeHavilland Company responded with the Dash 8.  Instead of using four engines, it would use two more powerful PW120 engines.  It would a t-tail to limit the effects of prop wash.  I'm not sure why it would use a high aspect wing, but it gave it a very distinctive appearance.  The first flight was in 1983.  Since then, a little over 1200 planes have been delivered. 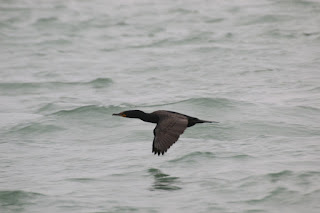 I like the time I spend near the water.  It is a peaceful and mostly happy place for me.  In between boats, the sound of the waves and other things have a generally calming effect.  Seagulls are sometimes my happy place birds, but I think the cormorant is more so.  I think they are cool looking birds and when they are standing on something in the water, they sometimes look like they are saluting the ships.  Anyway, it always makes me happy to see one.
Posted by Mikoyan at 1:02 PM