A couple of months ago I wanted to get a plastic model of a 757.  I have one of the airport gift shop versions on my desk at work which is pretty nice but I wanted a kit to build myself.  I stopped in Model Cove in Ypsilanti (which is a pretty good model shop btw) but they didn't have one.  I did end up getting a 787 model which is pretty nice (I'll post pictures of that one at some point). 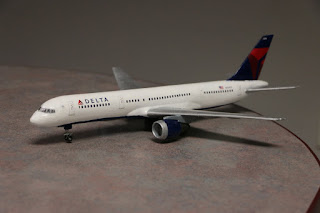 When I was going to Hidden Lake Gardens a couple of weeks ago, I stopped in the Hobby Shop in Tecumseh (which is also very nice btw).  As luck would have it, they had the Air Force II version of a 757 (VC-32 in case you care).  While I wanted a 757 model, I didn't want to use that livery. 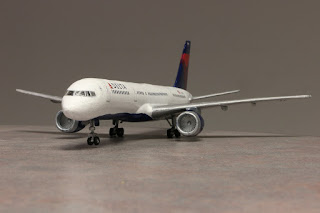 Then I remembered that there are shops online that sell custom decals.  I stumbled across this company called Draw Decals and I figured that I would try them out. 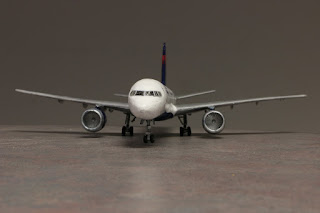 I decided to go with Delta decals because that is the airline I see most frequently.  If I had a little more talent I would have tried to replicate one of the Iceland Air planes that resemble the Aurora Borealis.  Maybe I'll try that for the 757-300. 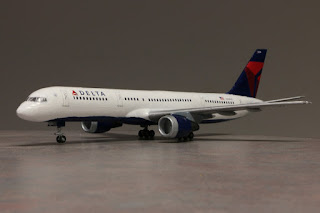 Anyway, the kit is a Minicraft kit and it wasn't too bad to put together.  I had to do a little putty for some of the seams but it wasn't too bad.  I kind of screwed up the decals on the other side but again not too bad.  Given that I really haven't built a model in a long time, I'm fairly pleased with how this one came out.  Especially given that the decals behaved differently than what I'm used to. 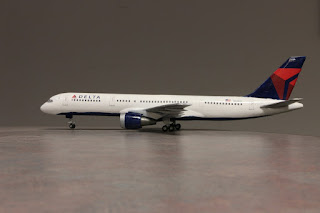 The tail number is N534US is one of the planes owned by Northwest.  This is an older version of the 757.  The newer ones have winglets and two doors over each wing.  At some point I plan on building a 757-300 to go with this one, I'll do a newer one then.
Posted by Mikoyan at 8:08 PM