I ended up going up to my cousin's for both a Memorial Day cook out and a celebration of his wife to be graduating from college.  As I was heading out, I thought the angle of the sun would be good for catching one of the statues in Ypsilanti. 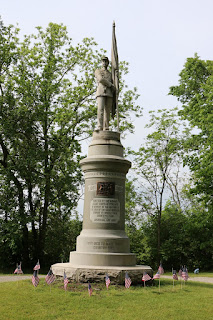 This statue is located in Highland Cemetery in Ypsilanti.  It is dedicated to the people that served in defense of the country during the Civil War.  The cemetery itself was designed by Colonel James Lewis Glen of Niles, Michigan and built in 1863-1864.  It's design reflects the garden type cemetery that was popular in the 1840's.  He also designed Forest Hill in Ann Arbor (which has appeared on this blog before). 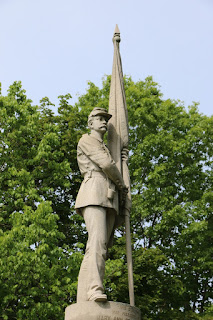 The idea of the statue came from the Women's Relief Corps under the leadership of Florence Babbitt.  They were told that if they could raise $1,000 that money would be matched by Mary Starkweather of Ypsilanti (she features fairly prominently in Eastern Michigan history too).  They were able to raise that money and more in order to pay the $3,500 to build the statue.  It is cut from solid gray granite and was unveiled on May 30, 1895 which was Memorial Day that year.  It is a pretty detailed statue. 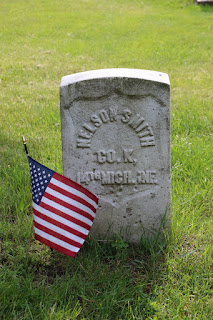 The statue is surrounded by gravestones of various veterans. 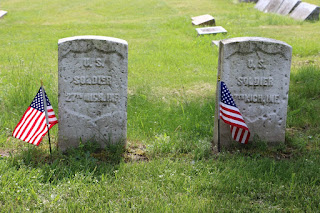 Some of the people buried here are unidentified. 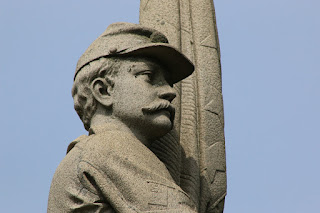 A detail shots of the statue's face.  I like the detail that went into this statue.  It's kind of a shame that it is in an out of the way spot but it is also in a quiet place and gives you moment to think about things. 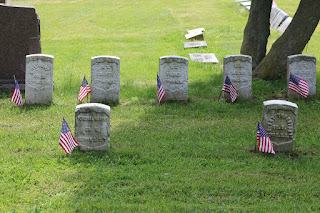 Some of the other stones. 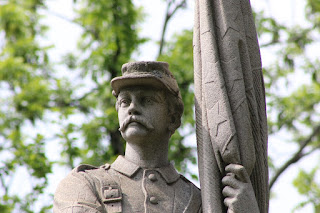 Another angle of the face.  It's kind of amazing that whoever sculpted this was able to catch the 1000 yard stare.
One of the most dangerous jobs in the Civil War was that of the flag bearer.  Because the regimental colors were used as a rallying and focus point, the opposing side would tend to take those soldiers out.
In fact, Arthur MacArthur Jr. (the father of Douglas MacArthur) was awarded the Medal of Honor after retrieving the regimental colors and planting them on Missionary Ridge during the Chattanooga Campaign.  He rallied the men by shouting "On Wisconsin".  Because of this, he was brevetted to Colonel and at the age of 19 was nicknamed the "Boy Colonel".  He would later get severely wounded during the Battle of Franklin.
He was mustered out of the service in June of 1965 and started to study law.  He didn't like that, so he went back in the Army and started to fight in the Indian Wars.  He would then go on to fight in the Spanish-American War and the Phillippines Wars.  In 1902, he was named the Military Governor of the Phillippines.  He would retire from the service in 1909 at the age of 64 and was one of the last members of the military to have served in the Civil War.
His son Douglas MacArthur would get awarded the Medal of Honor in World War II, making them the first father-son combination to receive the Medal. 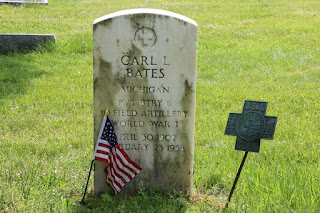 This is one of the more standard military grave stones.

Anyway, while you are enjoying your barbecues or whatever else you do on Memorial Day, remember the folks the day is dedicated to.
Posted by Mikoyan at 10:28 PM