May the 4th is unofficially the Star Wars holiday and I'm officially a Star Wars fan.  I try to do something Star Warsish for this page every year. 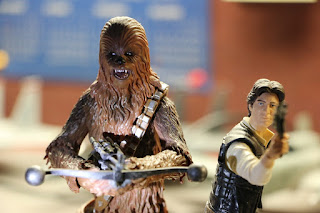 For this year's picture, I try to recreate one of the more icon Star Wars photos out there.  It is a shot of Han Solo and Chewbacca presumably fighting their way out of some situation.  I think the picture itself was just a still because the scene as depicted never appears in the movie.  Still, it's a pretty cool picture.