I had a little time to kill at lunch on Monday, so I decided to head to the back of the office to get some pictures.  Normally there are planes from the Ann Arbor Airport doing touch and goes.  Occasionally I can get a decent shot of one of the planes flying overhead.  If the traffic patterns are right, I can get good pictures of planes taking off from Detroit Metro. 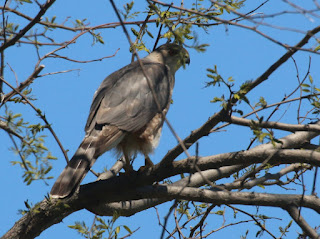 As I was heading outside, I saw this guy in one of the trees behind the office.  It has been a while since I've seen a hawk out there.  We used to have one that would visit fairly often but he got spooked when the addition was built.  So it was kind of cool to catch him.  I think it's a Cooper's Hawk.
Posted by Mikoyan at 7:52 PM