The Royal Jordanian flight comes in Detroit Metro on Mondays and Thursdays.  Since it was already a three day weekend, I decided to make it into a 5 day weekend and I took Thursday and Friday off.  Part of the reason was that I heard that the Algosteel may be making a Grand Haven appearance on Friday.  The other part of the reason was to catch the 787.
Well as I checked Flightaware on Thursday morning, I saw that the planes were landing from the south and I'm not particularly happy when they land from that direction.  As I looked a little closer, I saw that they were using the far west runway to land.  So I decided to head over the airport. 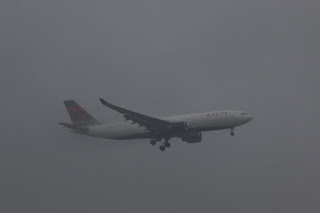 As I headed outside, I saw that the weather wasn't being particularly cooperative, but I figured that I would give a shot.  I've discovered that weather makes for better pictures.
As I arrived at my spot, it almost didn't look like I was going to get any plane pictures and then I saw one come in for landing.  So I put the right lens out and braved the rain.
I just missed the 787 but I was able to catching this Airbus A330 coming in from Amsterdam. 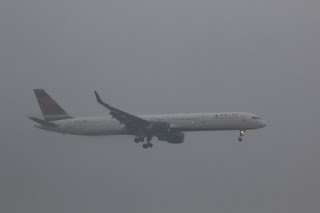 As I looked at Flightaware, I saw that there was a pair of 757's coming in.  I figured that I could brave the rain for a little longer to catch both of them.  First up was the 757-300 coming in from Orlando.  It also turns out that this is one of my 757 models. 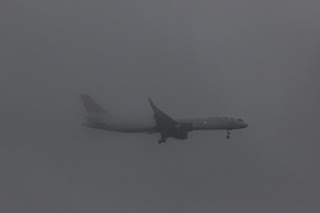 And this one was also coming from Florida but it was Florida Southwest International which is by Fort Myers. 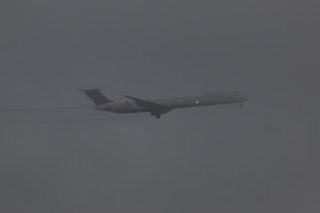 I think this one is an MD-90 but unfortunately I can't make out it's tail number. 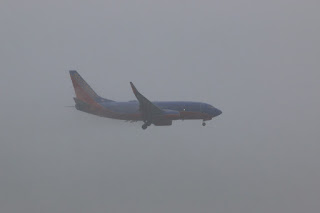 Unfortunately, I can't make out this tail number either.  But I know it's a Southwest 737.
Posted by Mikoyan at 7:22 PM