Detroit first hosted the Grand Prix in 1982.  Originally it used Formula One cars and raced through downtown Detroit.  There were several issues with it being run in downtown Detroit and the group that controlled the race ended it in 1988.  In 1989, CART took over the race and moved it to Belle Isle.  That lasted until 2001 when CART's contract with Detroit expired.  Many of the drivers didn't like the course stating that it was too narrow and didn't allow much competitiveness.  In 2007, the event returned to Belle Isle but only lasted the two years as the automotive industry was in the throes of a crisis, at this point it was taken over by the Indy Car Races.  The hiatus was brief as racing returned to Belle Isle in 2012 and has been going on since. 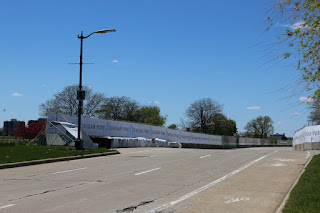 But of course, that's the history and now the rant.  Honestly, I don't have a problem with the fact that they race on Belle Isle.  I would hope that it gives Detroit somewhat of a shot in the arm with the amount of tourist dollars it brings in.  If I were to watch the race, it would probably be cool to see some of my stomping ground on TV.

Where I have a problem is with the amount of disruption and the amount of time that this disruption lasts.  As they are building up the stands and the circuit, it's not too bad but it still ties up the western half of the island.  As they put the finishing touches on that stuff, that part of the island is completely closed off.  This sometimes makes the rest of the island even more unbearable.  Again, I wouldn't have a problem with that but it ties up the island for close to two weeks prior to the race and almost a week after.  That seems like alot of disruption for an event that basically lasts a weekend.

Of course, on the weekend of the race, you can't go to Belle Isle at all unless you want to watch it.  Maybe one of these years I should find out how much tickets cost.  Anyways, all I can do it is bear it.
Posted by Mikoyan at 8:36 PM