I thought I was gonna wander around Ann Arbor or something tonight but it was raining pretty hard, so I ended up taking some more pictures of my diecast models.  Tonight are pictures of some of my Navy aircraft.

First up is the A-4 Skyhawk. 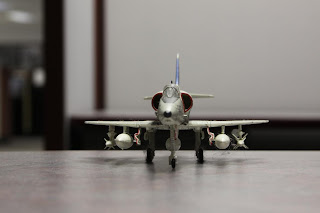 The A-4 Skyhawk was built by the Douglas Aircraft Company and was designed by Ed Heinemann (of Saginaw).  He opted for a design that would minimize it's weight, size and complexity and in doing so built an aircraft that was half the weight of the Navy specfication.  The wings ended up being so small that they didn't require folding (like other Navy aircraft).  The design was highly sucessful however and was used by the Navy, Marines and many of our allies. 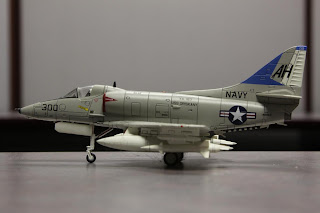 The plane had a nickname of Heinemann's Hot Rod because of it's nimbleness and it could still carry almost 10,000 pounds of armaments.  It was used by the Blue Angels for a number of years.  It is still used by a number of countries.
Posted by Mikoyan at 6:19 PM