I know that I've posted this plane on here before but I don't think I've ever made a separate post of it.  so here goes.
Probably one of my favorite Navy planes from the Vietnam Era was the A-6 Intruder.  Part of that is because I had a Navy boardgame called 2nd Fleet and on the cover was an A-6 blowing up a Kirov class cruiser.  The other reason was because of a book called "Flight of the Intruder".  The movie wasn't too bad but the book was much better. 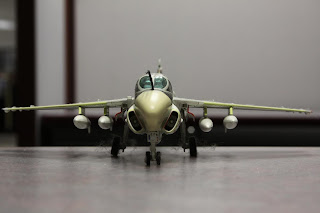 The A-6 was built by the Grumman Aircraft Corporation and had it's first flight in 1963.  I believe it was one of the first All Weather Jets.  Which meant it could be used in any weather or at any time of the day.  It could carry 18,000 pounds of weapons. 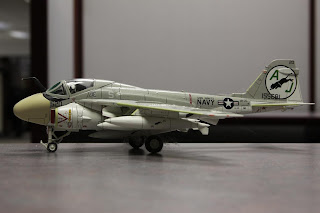 The last attack version of the A-6 flew in 1997.  The electronic warfare version lasted a few years longer than that.﻿
Posted by Mikoyan at 6:25 PM