The Remnants of a Train Ferry Crossing Point

Almost directly across the from the Bridge in the last series of pictures is what appears to be a train ferry crossing point.  Unfortunately, I don't have too many details about this but I did find a website that shows it in operation. 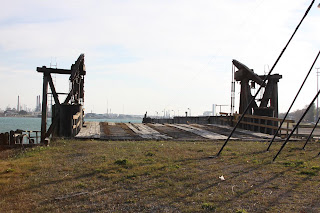 Based on its location, I would say that it was owned by one point at the Pere Marquette.  But the picture I found above seems to indicate that it may have been owned by the Grand Trunk which in turn was bought by the Canadian National Railroad.  So color me a bit confused.   Of course it's possible, they did own the track that went into this. 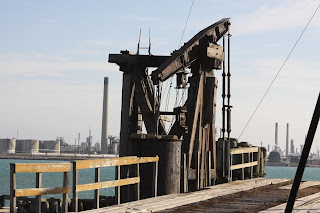 Also from the above link, I'm guess this went out of service sometime after the 80's.  Based on the information from some of the ships, I'm gonna guess sometime in the mid 80's.﻿
Posted by Mikoyan at 8:16 PM