So I decided to head up to Port Huron with a friend today. It was a nice day and the sun was shining. There were a few clouds in the sky but it didn't look like it would rain or anything like that. Given that we are starting to enter the part of the year where the weather can turn on a dime, I decided it would be a good idea to get out and about.
Port Huron is probably as good for boatwatching as Detroit.  In one way, it may be a little better as it has the Boatnerd Headquarters and you can watch the ships from the inside.  The river looks as nice there though. 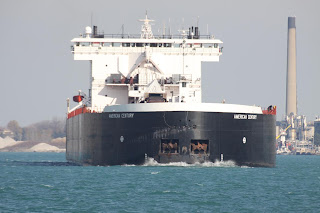 This was actually taken from Marysville because I noticed that she had passed Port Huron and I didn't want to miss her.  This ship is the American Century and she is making her debut on Michigan Exposures. 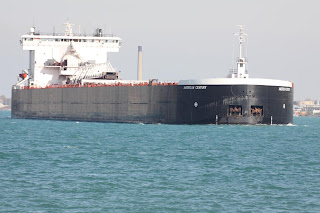 The American Century started life as the Columbia Star.  She was built by the Bay Shipbuilding Company in Sturgeon Bay, Wisconsin in 1980.    She was originally launched for the Columbia Transportation Division of the Oglebay Norton Company of Cleveland, Ohio. 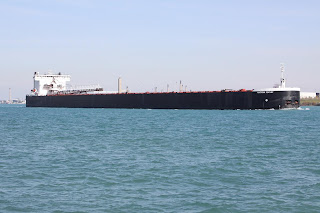 I think she is the sister of the Indiana Harbor and Burns Harbor but I am not sure.  She is powered 4 3,620 Horsepower GM Diesel Engines which gives her a top speed of around 15 knots.  She is 1000 feet long but I'm not sure what number of the 1000 footers but she is the 8th one to appear on this blog. 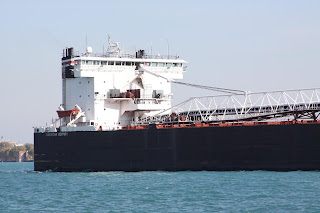 She can carry 78,850 tons of cargo and is a self unloader.  She is equipped with both bow and stern thrusters enabling her to maneuver in some tight spaces. 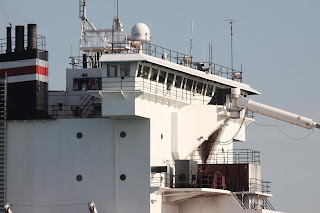 Columbia Transportation was phased out in 1994, which led to her getting painted in the Oglebay Norton scheme.  Since 1999, she has been mainly been hauling coal to the power plants but occasionally she will haul other materials. 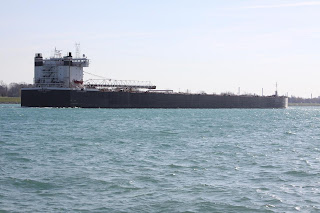 In 2006, she was sold to the American Steamship Company where she was given her current name. 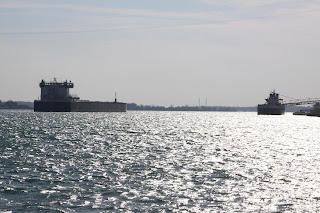 Here she is passing by the Manitowoc which is docked at the Marysville Power Plant. 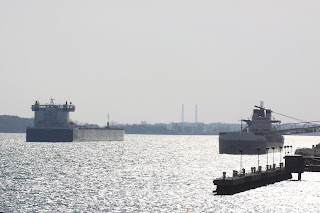 I think I like this shot a little better.
Posted by Mikoyan at 9:00 PM

American Century was the last (13th) 1000 footer built on the lakes.