So I leave you with one more set of ship pictures tonight.  This time it is the Pacific Huron.  I don't have any details about this ship, so I just leave you with the pictures and some comments.  It looks like the Lake Ontario that I have taken pictures of before. 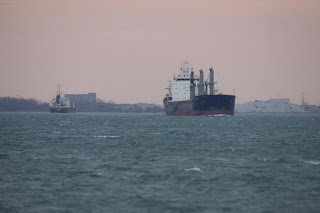 It was starting to get darker as I looked downriver.  I wasn't sure if I could stick around long enough to get pictures of her.  So I wandered a bit and got the train pictures and some of the skyline pictures.  As I came back, I saw the Westcott start to warm up, so I figured she was coming closer. 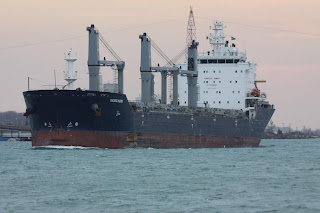 Sure enough, she was.  Fortunately, I had enough film speed in the camera and enough light so that I wouldn't have a bunch of blurry ship pictures. 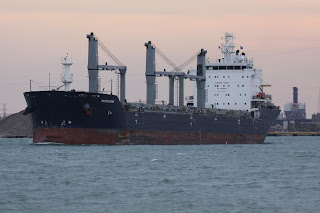 I almost wasn't going to stick around but I'm glad I did because I really like the pinks in the sky set off against the ship. 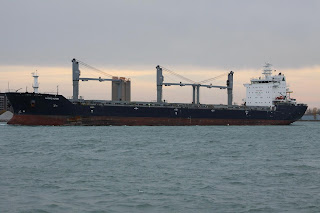 I think I like this shot a little more because of the gray sky just above. 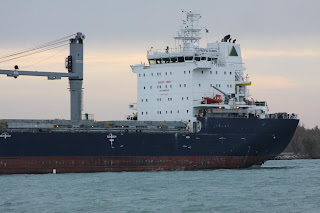 A shot of the superstructure. 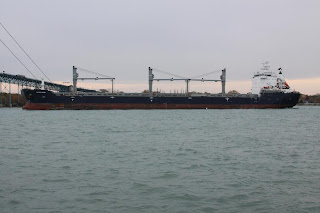 A shot as the ship approaches the Bridge. 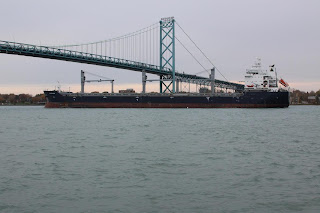 This is one of the other reasons why I like Riverside Park.  I get some nice shots with the Ambassador Bridge in the background.  I don't care who owns the Bridge, it is still a nice looking Bridge. 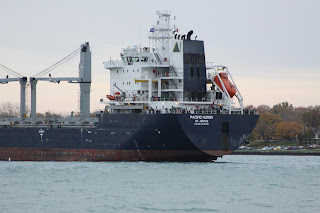 As I leave you with a stern shot as she heads upriver.
With it getting dark earlier, I'm not sure how many more times this year I will be able to get pictures as I go home from Troy.  I was barely able to get this pictures.  Of course, it wont matter much longer as the River starts to freeze up.  I would love to get a shot of a ship making its way through the ice though.﻿
Posted by Mikoyan at 10:48 PM