The Huckleberry Railroad is open for the Christmas Season and evidently they have the park all decorated with Christmas lights.  On the way home today, I thought I would stop there and catch one of the earlier trains.  Evidently a few other people had the same idea and I couldn't get on that train.  I kind of wanted to grab the early train so that I would still have a little light to take pictures.  So I think I will try again. 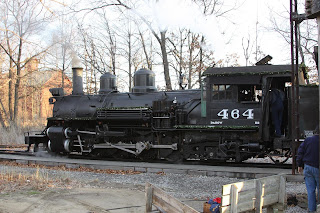 The Huckleberry Railroad is just north of Flint (or it might be in Flint but not Flint proper) and has an old Denver and Rio Grande Western Steam locomotive.  This is a 2-8-2 locomotive, so named because of it's wheel configuration.  I'm not entirely sure what the numbers mean in the scheme of things though.  It was built in 1903 by the Baldwin Locomotive Works in Philadelphia.  It pulls various passenger cars made in that era. 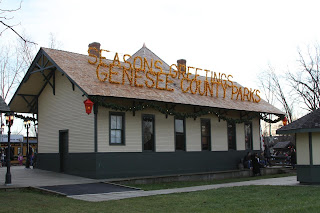 The railroad itself goes over old Pere Marquette tracks and is so named because at one time, people could get off, pick huckleberries and get back on the train.  I'm not sure when this particular line was retired though.  Last time I was here was probably over 30 years ago.
But as I said, it was busy so I will try again.
Posted by Mikoyan at 5:23 PM

I just discovered this, nice shot of the 464! She's my girl, I love that engine! I should publish some of my photos from there one of these days...