After taking pictures of the American Century and Manitowoc, we headed over to the Great Lakes Maritime Center which also serves at the headquarters for boatnerd.com.  It is a pretty nice place, they have a little cafe but more importantly, they have places where you can set down for boatwatching.  There is both an inside and outside area and it is in a prime spot for boatwatching (maybe not as prime as Belle Isle or Riverside Park but pretty close).

In addition to the places to sit, they have monitors for the Weather Channel and a monitor which shows the ships in the area.  As the ships are passing by, they relay details about the ships.  All in all, a very cool experience. 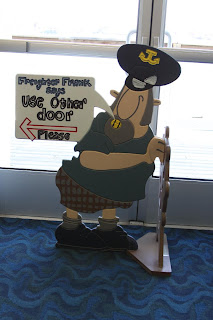 There are many little nautical themed things around the inside including a bunch of models of different freighters.  There is also a little bit of history of the Port Huron Area. 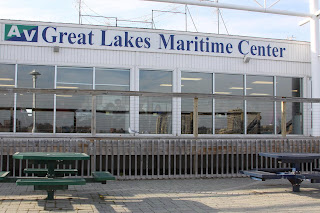 This is the side of the building that faces the St. Clair River.  As you can see, plenty of viewing. 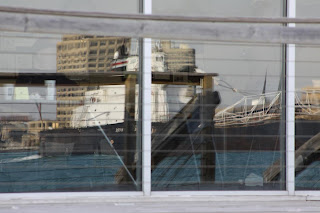 And for an abstract picture, a shot of one of the ships as it passed by.﻿
Posted by Mikoyan at 7:34 PM