So I was up in Troy today and I was able to leave a little early.  I thought that maybe I would have a little chance for some shipwatching..... 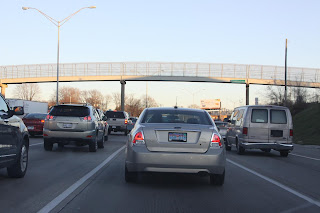 I guess it was not to be.  I knew I should have paid attention to the fact that there was a backup at I-696.  Except that there usually is a little bit of a backup there, so I didn't think anything of it. 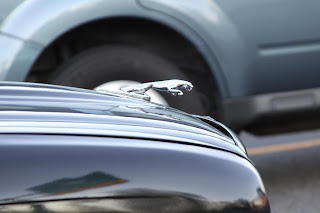 There was a Jaguar next to me.  I thought the hood ornament looked kind of cool, except I think I should have cropped this a little more.  And yeah, this was about a half hour after the last picture.  I think I moved about 5 miles or so. 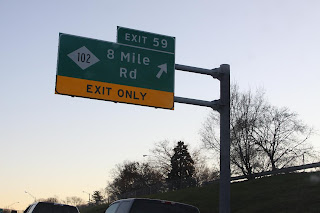 8 Mile Road is probably one of the more famous streets in Detroit.  Mainly because of the Eminem movie of the same name.  It is the traditional dividing line between Detroit and the Suburbs.  To some, it might as well be like the Berlin Wall or something.
As it turns out, there was a rollover accident.  Judging by the condition of the vehicle, I'm going to guess they didn't make it.  Well there aren't many details here but it seems that this was the result of a police chase.
Posted by Mikoyan at 11:07 PM

Probably an armed robbery or some kind of robbery. Either way, if they'd just stop for the police they wouldn't have this problem.