It has been a couple days since I've posted anything on my blog.  With the sun going down earlier, it's kind of difficult to get out and take pictures after work.  But I think I'm gonna try to do some night shots tomorrow night.  Anyway, I figured I would leave you with some of my "gee I don't know what to show tonight" pictures.

If you've followed this blog, you know that I like to collect action figures.  Occasionally that will wander into the realm of die cast figures of ones that I really like.  And this is one of those occasions. 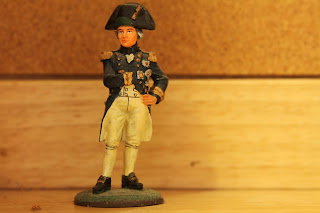 The first figure I will post tonight is of Admiral Horatio Nelson.  He was probably most famous for his victory at Trafalgar but he has had many other battles before that one.  He was born in 1758 in Burnham Thorpe, Norfolk, England and he was the sixth of eleven children.  His Naval Career started in 1771 when he reported to the HMS Raisonnable as an Ordinary Seaman and Coxswain under his uncle, Captain Maurice Suckling.  Shortly after that, he was appointed as a Midshipman.
In 1777, he received his comission.   His first command was the Albemarle and he escorted a convoy from Russia to England.    In 1787, he was married.
During the Napoleonic Wars, he participated as an Admiral until his death at Trafalgar in 1805.    He is immortalized by Trafalgar Square in London.﻿
Posted by Mikoyan at 10:47 PM