Since I was in Troy today, I decided to stop at the park on the way home.  I thought that maybe I'd have enough light to catch any ship pictures if there were any going down the river.  Sadly, there was only a barge and it wasn't coming that far up the river for me to get a picture of it.  I kind of wish I could have gotten a picture of the river itself as there were whitecaps.
It was also pretty windy so I tucked my Michigan hat in my coat because I didn't want to take pictures of the Sinking of the M-Hat IV.  Especially since this hat has been in the Big House Tunnel. 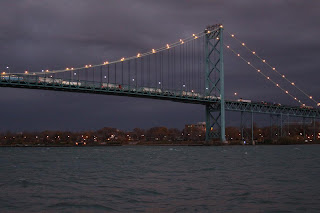 I was thinking about taking a panoramic shot of the Ambassador Bridge but I wasn't sure how that would work out.  So I just took a picture of one part of it. 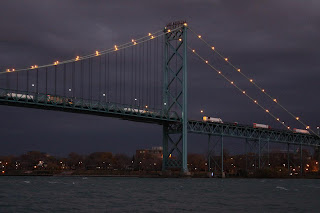 I wanted a slightly tighter shot of the bridge. 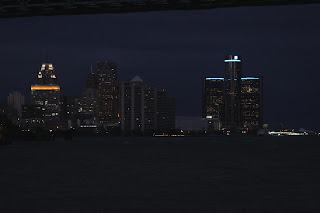 And of course, I had to take a picture of the Detroit Skyline because many of the buildings were lit up.  I might have underexposed a bit.
Posted by Mikoyan at 9:44 PM