November 11th originally started as Armistice Day in 1919 with Woodrow Wilson saying:"To us in America, the reflections of Armistice Day will be filled with solemn pride in the heroism of those who died in the country's service and with gratitude for the victory, both because of the thing from which it has freed us and because of the opportunity it has given America to show her sympathy with peace and justice in the councils of the nations."  It was repeated 7 years later with Congress passing a resolution stating that President Coolidge issue the same proclamation.  In 1938, it became a legal holiday honoring the people that died in World War I.

In 1953, a Kansas man named Alvin King started a campaign to turn Armistice Day into a day to honor all veterans and not just those that died in World War I.  This came to fruition in 1954.  In 1971, it was moved to the Fourth Monday of October only to be moved back to November 11th in 1978.

So in order to honor our veterans, I took a couple pictures.  These are of a couple of my action figures and I then modified the pictures to give them the World War II look.

Overseas it is known as Remembrance or Armistice Day still. 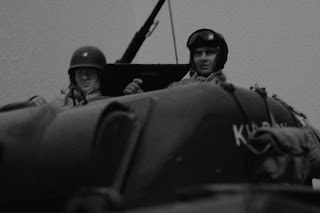 A pair of armored soldiers from World War II. 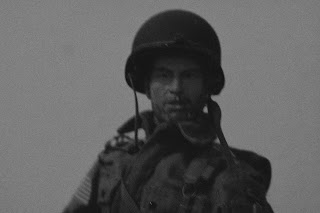 This one depicts an airborne soldier.
Posted by Mikoyan at 7:20 PM