Just east of the Wilderness Battlefield is the Battle of Spotsylvania Courthouse. This was basically a continuation of the Battle of the Wilderness. After that battle, Grant disengaged his forces to the southeast in order to force Lee to battle in a position that was more favorable to Grant. Fighting occurred from May 8 through May 21, 1864. The battle was inconclusive, but probably a strategic victory for the North as it sapped Lee of more resources. 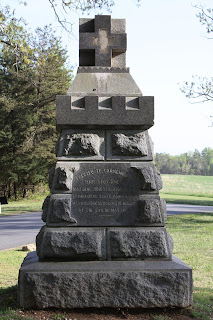 General Sedgwick was killed at this battle by a Confederate Sharpshooter. He was admonishing his men for hunkering down and saying that they were too far to be hit by sharpshooters. Guess he was wrong. 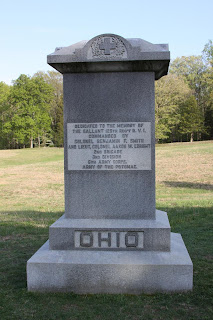 This monument was at a spot called the Bloody Angle. It was the spot of the heaviest fighting in the battle. If I would have known it was an Ohio monument, I wouldn't have walked out to it. But as I was there, I figured I would take a picture of it. 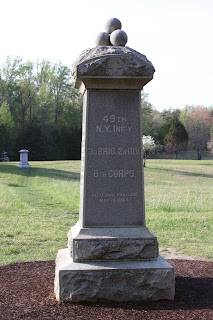 A monument to one of the New York units that fought there. 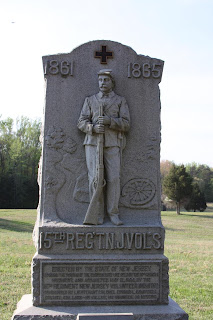 And one of the New Jersey units. 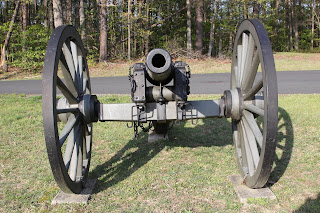 It wouldn't be a Civil War battlefield without a cannon. 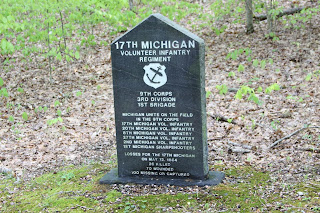 This was a unit that mustered in Detroit, Michigan. It would be nicknamed the Stonewall Brigade of the North.
All in all, I would say it was pretty cool to visit these battlefields. It was pretty cool to see the trenches somewhat preserved because you could almost imagine what it was like. Unfortunately, 150 years of erosion has taken their tole on them and they look more like shallow depressions than trenches. It is one thing to read about these battle but they really sink in when you go see where they happened.
I've read about the march of progress and its consumption of the Civil War battlefields, this was a place where you could see it firsthand. I realize that progress has to be made but sometimes it is nice to preserve places like this. We are such a spacious country that I think we can do that.
Posted by Mikoyan at 6:34 PM

The fighting at Spotsylvania Courthouse was especially brutal and protracted. The campaign demonstrates the effectiveness of maneuver warfare.

They seemed like distinct battles but one was a continuation of the other.