The People Mover comes around near where I was taking pictures of ships. It is a neat idea and would be a neater idea if it actually went further than the area it currently goes to. It's not terribly convenient as you can walk to most of the places it services. 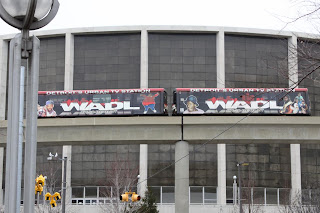 The People Mover has its origins in the Urban Mass Transit Authority that was created in 1966 by the US Congress. After years and years of messing around, it was finally opened in 1987. It was anticipated to have over 60,000 people riding it daily. It averages about 288,000 riders per day and is pretty heavily subsidized. 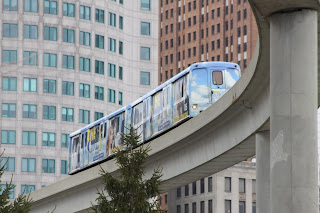 There are plans to expand the People Mover to go up Woodward Avenue to the Amtrak Station (which is near the Fisher Building). This may help it get more riders. I would like to see this in conjunction with the planned light rail from Ann Arbor to Detroit from the West and the light rail from Pontiac to the north.

I think it is a neat idea as it might bring Detroit more inline with other cities as far as not needing a car to get downtown.
Posted by Mikoyan at 7:45 PM