My last ship of the day was the Robert S. Pierson. This one was kind of surprise because we were about to leave and my friend caught sight of it. I didn't see it on the boatnerd list, so I was pleased. 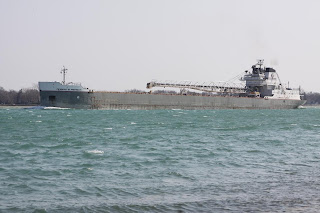 The Robert S. Pierson was constructed by the American Shipbuilding Company (which at one time was controlled by George Steinbrenner of the Yankees) in Lorain, OH in 1973. She was constructed for the Union Commerce Bank and would be operated by Ogleby Norton Company. She was originally named the Wolverine (why anyone would want to change this name is beyond me...stupid stupid stupid) because most of her cargo originated in Michigan. 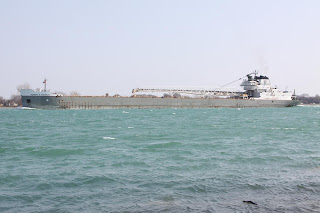 She is powered by two V-16 Diesel Engines with a total rating of 5,600 horsepower. She is 630 feet long and is a self unloader. Her near sister ships are the Calumet and Manitowoc. She represents sort of a step back in design as she was designed to operate in the Cayahoga River (I wonder if they painted her with flame resistant paint...hehe). 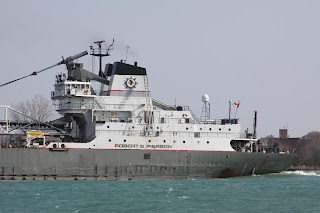 She mostly carries iron ore pellets but can carry other things. 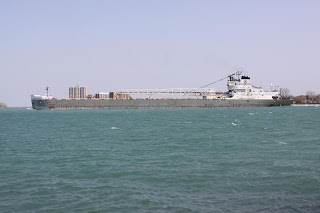 In 2006, she was sold to the Wisconsin and Michigan Steamship Company. She was operated by the Lower Lakes Transportation Company and painted to match their colors. 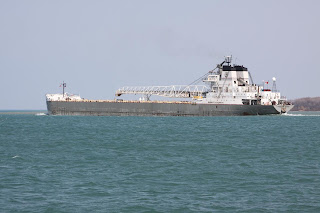 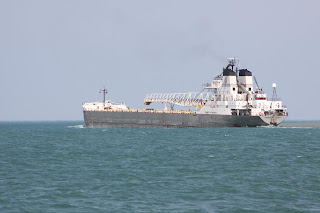 She'd look cooler if it said Wolverine on the back though. 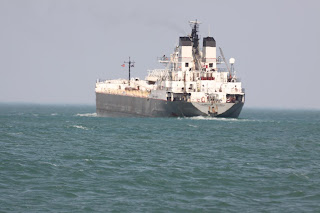 In 2008, she was transferred to the Lower Lakes Company and renamed the Robert S. Pierson.

The Robert S. Pierson is in front of my house on the South Shore of Lake Ontario (Charlotte, Crescent Beach, Rochester, NY) as I write.

She was here all day yesterday and spent the night.

My husband has speculated that they must eat "real good" on the boat. I asked him what "real good" was and he said good cuts of beef and lobster and shrimp...haha.

I have some good pictures but I don't see anywhere to attach them.