To me, this is probably one of the most moving memorials I have ever seen. I have seen many war memorials but they are usually just scenes of a battle or a guy on horseback or something like that. They aren't usually something that addresses the sacrifice of war. Sometimes, you may see a memorial that lists the names of people from a particular town or county that served in a certain war but it just doesn't have the same impact. This memorial lists the names of everyone that died in the war. Granted they are just names but it is hard to separate the fact that behind the name is a person. 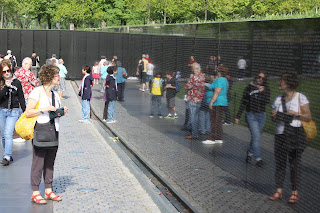 When this memorial was created, I was at an age where I started to pay more attention to the news and I remember some of the controversy surrounding the creation of the memorial. Many of the veterans and politicians rejected the design because to them it looked like a big ditch or something. 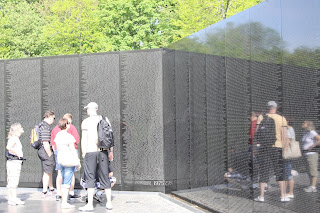 The sculptor was Maya Lin, whose parents came here from China. She won the contest at the age of 21 while she was still a student at Yale. When it was later revealed that she was of Asian decent, that caused even more problems. The wall was supposed to represent a gash and she figured that it was a way for the healing over the war to begin. 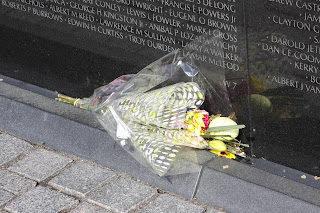 Over time, the Wall began to be more accepted and is now one of the more visited spots in Washington. I first visited it with my dad in 1983 and I was really too young to appreciate it. I remember being more moved the last time I visited it. Seeing stuff like this makes it even more moving because not only do you think of the life lost but the people left behind. 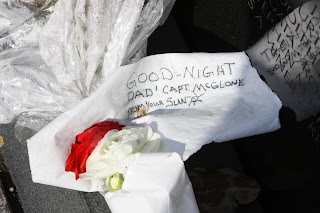 Stuff like this is even more moving. Admittedly, the person who wrote this is now my age or older, I can't help but thinking of a little kid that lost his dad. 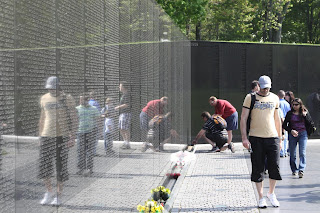 The stones for the memorial came from Bangalore and they were chosen for their reflective capability. It is pretty neat to look at the wall and almost see yourself in it. You can almost imagine a ghost. 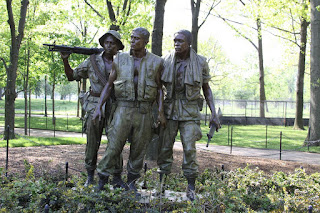 As a compromise, this statue was created by Frederick Hart as an attempt to do a more traditional statue for the Vietnam War. These three men depict the typical combat soldier from Vietnam. You can also see hints of three different ancestries - white, hispanic and African American. They seem to be staring towards the wall and as such are a part of the wall. 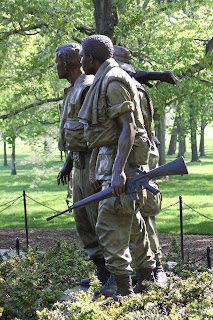 These men represent both the US Army and Marines as they have equipment that is typical to both. 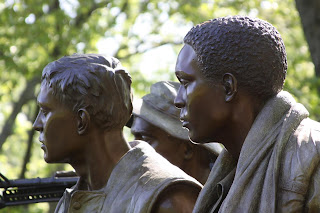 The wierd thing about the statue is that it captures the "1000 yard stare" pretty well. As such, I think this statue represents a departure from the normal war statue. 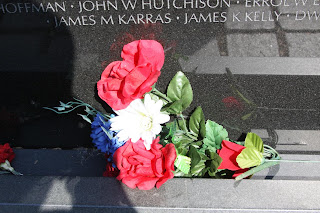 Another flower left behind at the wall. A few years ago, there was an exhibit at the Smithsonian of the various articles that have been left behind. 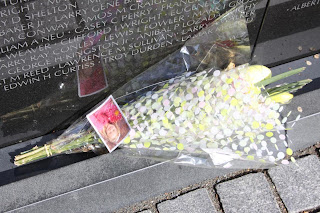 Another item left behind.

Unfortunately, pictures don't really do this justice.
Posted by Mikoyan at 7:49 PM

This page is well done.