On Wednesdays, I typically head up to our office up in Troy. Depending on my mood, I will either head to M-14 then I-275 then I-696 and then I-75 to 14 Mile Road. Or I will take I-94 to I-75 to 14 Mile. Today was the M-14 route. And well, the weather was miserable today which meant that someone got themselves into a pickle which meant brake lights and stopping.

Now remember, when it is raining, snowing or whatever drive according to the conditions. This doesn't mean to drive like a turtle but it also doesn't mean to drive like a bat out of hell. Be cognizant of how your vehicle is handling, if it feels like it is slipping perhaps you might want to ease on the gas a bit. If you see cars stopping ahead of you, slow down because that means you're probably going to be stopping too. Driving against the bumper of the car in front of you isn't going to get either of you to your respective destinations quicker. In fact, it may end up delaying you as you learn that matter can't occupy the same space at the same time.

Well anyways, sure enough someone got into a fender bender which meant traffic stopped. 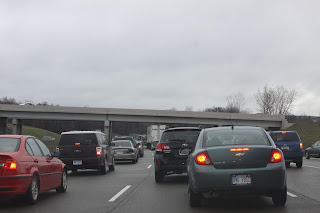 In the 1920's, M-14 was a highway that ran most of the lower penninsula. It started near the Ohio border and terminated around Kalkaska. Later it was extended to just south of Cheboygan. In the 30's, it was designated from Battle Creek to Edmore until it was replaced by parts of M-66.

In the 1950's, US-12 was re-routed to where it is now. The former route which is now Plymouth Road was designated as M-14. This lasted until I-275 was completed. M-14 is now an expressway from roughly I-275 and I-96 to I-94 heading roughly southwest (or northest depending on your point of view).