So yesterday I decided to take a trip along the old Saginaw Trail. That meant a stop in Detroit at first, so I decided to eat lunch at American Coney Island on Lafayette Street. 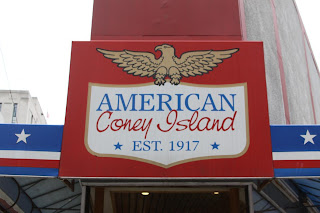 The sign in the very front of the building. 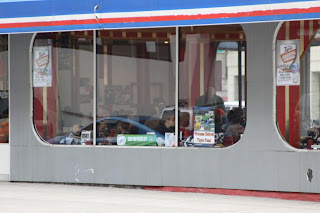 In my quest to capture a "Nighthawks" moment, I decided to snap a picture of the window. It doesn't quite work though but oh well. I kind of like the picture. 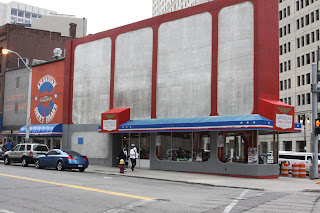 This restaurant is at the corner of Michigan and Lafayette. There is also Lafayette Coney Island next door. I think next time I am in Detroit, I will try that one out. 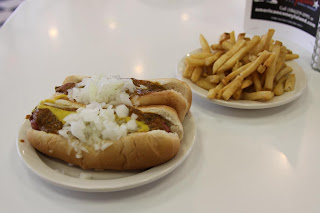 Despite it's name, the Coney Island Hot Dog has its origins in Michigan. The first coney dog was started in Jackson, Michigan in 1914. It has a beanless chili, yellow mustard and onions and is pretty darned tasty. The hot dog is usually grilled. Three years later, this recipe appeared in Detroit at both restaurants I mentioned above. The Detroit dogs have a more soupy chili than the Jackson dog.

There is also a place in Flint that serves a coney dog with a thicker chili which tastes almost like corned beef and is really good. It is called Angelo's.
Posted by Mikoyan at 6:48 PM