I've been meaning to get a picture of this railroad bridge for a while. Not because I think it is nice to look at although I do like the old trestle bridges. More because it reminds me of some bridges that used to be on the river. 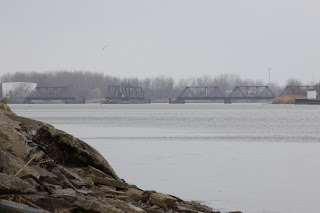 Bay City used to have a pair of road bridges that would swing out like this. One was the Belinda Street Bridge. This was replaced by the Independence Bridge which was completed in 1973. The other was the Third Street Bridge which was constructed in 1890 and damaged in the mid 70's (don't remember the exact year though). I think a freighter hit it.