The Edgar B. Speer at Mackinaw

One of my purposes for heading up to the Upper Peninsula was an attempt to catch some ships in spots where I don't usually get to see them.  So one aim was to get to De Tour Village.  I was hoping that I would catch a ship at the Mackinac Bridge but it is hard to gauge when there would be a ship going through.  Fortunately, a friend of mine showed me a website that shows all of the ship positions on the lakes and I saw that one was heading towards the Bridge as I was getting ready to leave. 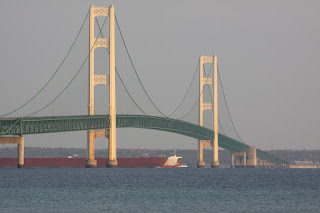 The ship turned out to be the Edgar B. Speer, which is a ship that has not appeared on this blog in the past.  It is one of the thousand footers, although it is hard to tell at the distance it passes under the Bridge. 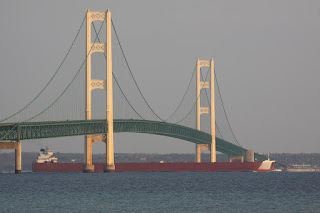 The Speer was built in two sections.  The forward section was built at the American Shipbuilding Yards in Toledo, Ohio and was towed to the American Shipbuilding Yards in Lorain, Ohio where it was welded to the rear section.
The Speer was launched in 1980.  She is powered by two 9,630 V-18 Cylinder Diesel engines and this gives her a speed of almost 15 knots. 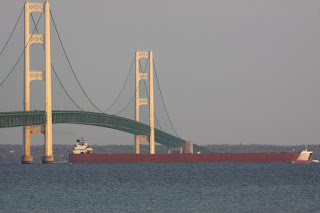 She has a unique self unloading system which means that she can only be used for the loading and unloading of taconite pellets.  Because of this she only services either the Gary or Conneaut, Ohio ports.  Her sister was equipped with this system but it was later replaced with the traditional self unloader. 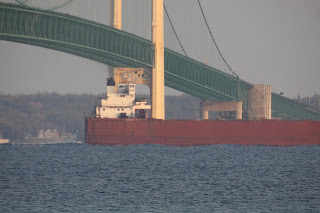 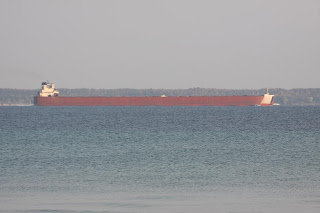 In 2006, the Roger Blough lost her rudder and was towed by the Speer to her destination. 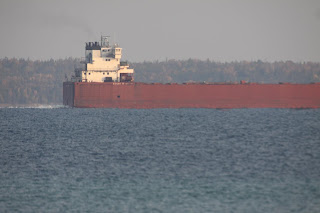 Here she is as she heads towards the Channel Islands and ultimately Lake Superior. 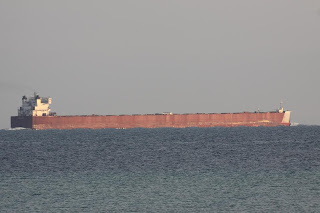 I will have to admit, it is cool seeing the thousand footers in action.
Posted by Mikoyan at 6:53 PM