As I said in my last post, I was out seeking the graves of Bo Schembechler, Fielding Yost and Bob Ufer. The first grave I found was Bo's because the website I found its picture on gave a pretty good idea of where it was. The other two involved a bit of searching but I did manage to locate them. 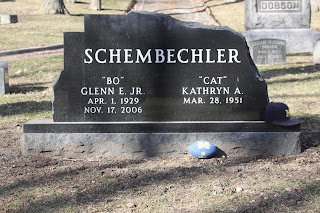 Glenn Schembechler was born in Ohio on April 1, 1929. His nickname of Bo came from his sister's attempt to say brother when he was younger. One of Bo's lessons came from his father who refused to cheat on a Firefighter exam and didn't get the promotion he was seeking because he scored one lower than the people who did cheat. From this Bo taught hard work and integrity.

Bo went to Miami University in Ohio where he played football as a tackle under Sid Gillman whose style laid the groundwork for the West Coast Offense. Prior to Bo's final season, Gillman went on to coach at Cincinatti and the program was taken over by Woody Hayes. Bo graduated from Miami in 1951 and earned a Master's Degree from Ohio State in 1952 where he was an assistant coach under Woody Hayes.

Bo had a number of assistant jobs until he got his first head coaching job at Miami University in 1963. He would serve as the head coach there until he got the job at Michigan in 1968. His tenure as head coach would yield him a record of 234-65-8, only Joe Paterno and Tom Osborne recorded 200 wins faster than Bo. His bowl record was not as good which meant he didn't win many national championships. Despite that, he is revered by Michigan fans everywhere (including this Michigan fan). Heart trouble meant that he retired at the age of 60 in 1989. He was followed by coach Gary Moeller. He died in 2006 just before the Michigan-Ohio State game. 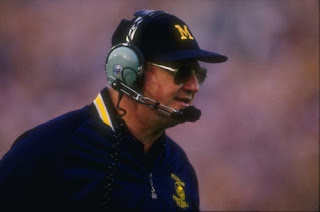 For me this is probably the iconic Bo image. Him standing on the sidelines, block-M cap, sunglasses and headphones. 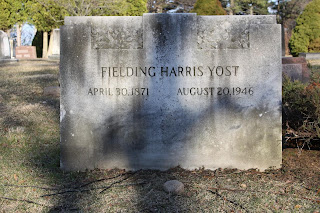 It was a little harder for me to find Fielding Yost's grave as the location I had wasn't the greatest. Finally, I managed to look up the website for the cemetary and they had a pretty nice locator on it and I found it immediately. 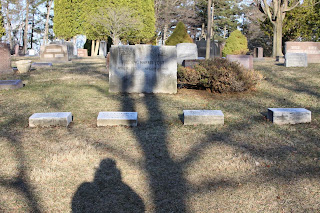 This is the whole family.

He was a for single seasons at Ohio Wesleyan, Nebraska, Kansas, Stanford and San Jose State until he became the head coach at Michigan in 1901. He was very successful at Michigan where he racked up a record of 165-29-10. Under Yost, Michigan would win a total of 6 National Championships. His 1901 team would outscore it's opponents 550-0 enroute to a perfect season and victory over Stanford in the First Rose Bowl. This would be the first of the point a minute teams.

From 1901 to 1904, Yost never lost and only tied once. This tie was in the legendary game against the Minnesota Gophers where the Little Brown Jug was formed. Basically, Yost didn't trust the people in Minnesota, so he brought his own water supply. He left one of the brown jugs behind and was told that if he wanted it back, he'd have to win it. Thus College Football's first trophy was born.

He retired from coaching in 1926 and would become Michigan's Athletic Director. Under his leadership Michigan Stadium, Yost Fieldhouse (now the Ice Arena) and the golf course were constructed. This leads to one of Michigan Stadium's nicknames - The House that Yost Built. He died in 1946 of a gall bladder attack.

This is a picture of Yost. 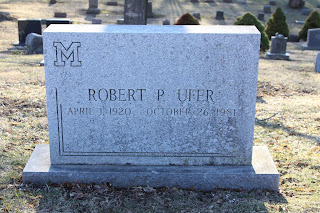 Right across by Yost's grave is Bob Ufer's grave.

For me, Bob Ufer is probably Michigan football the most. I admired Bo and I knew about Yost and I would watch Bo on Saturdays but I would listen to Ufer when I started to listen to Michigan football games. Unfortunately, he died before I really got into football but his game calls are legendary and you can hear some of them online. There were many people in the state who would turn down the TV to watch the game but would listen to it on the radio. Nobody could bring the game alive quite like Mr. Ufer.

Bob Ufer was born on April 1, 1920 in Lebanon, Pennsylvania. He would attend the University of Michigan where he was a stand out track athlete. In 1944, he would become the radio announcer for Michigan football and would hold the spot until 1981 shortly before he died of cancer. His football broadcasts were highly biased in favor of Michigan and you could hear his allegiance in his voice and there was no question which team he was rooting for. These broadcasts would be accompanied by a horn from Patton's jeep which he would blow three times for a touchdown, twice for a field goal and once for an extra point. He would get really exuberant when Michigan won and really sad when the lost. He had a head for facts and it showed during his broadcasts.

Here is a good link to his broadcasts and some more stuff about his life. 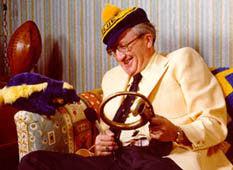 This picture comes compliments of the Bentley Library site (linked above) and shows his famous horn.

I think one of the amazing things is that for how big these men are for me, their graves are pretty unobtrusive.
Posted by Mikoyan at 7:25 PM

Thank you for posting this. I don't find it creepy, and think it was a fitting and respectfully done post.